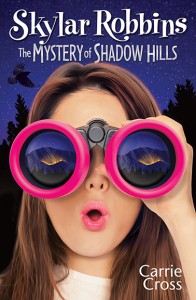 Thirteen-year-old sleuth Skylar Robbins plans to become a private detective like her grandfather. Stuck at her bullying cousin Gwendolyn’s Malibu estate for the summer, Skylar brings her detective kit, portable spy tools, and her journal for taking notes in secret code. She had no idea how dangerous the summer would prove to be.

On the first day of summer school an odd classmate named Kat passes a note in backward writing, introducing Skylar to the secret world of witchcraft. Practical Skylar didn’t believe in magic—until the spells they perform in an abandoned garden actually begin to work.

When Kat tells her that a mysterious group is doing wicked things up in Shadow Hills at night, she can’t help but investigate. The teen sleuth uses the tools in her detective kit and faces her most embarrassing fear to find the truth. If Skylar survives the summer, her life will be changed forever.

What Inspired You to Write Your Book?
When I was six years old, my parents decided we needed to buy a bigger house. We looked at a creepy two-story in Santa Monica Canyon, and I played hide-and-seek with the little girl who lived there. There were closets and secret hiding places with doors that opened into other rooms. Later, I wondered, “What if there was a clue hidden in one of those closets, or a secret message written on the wall in invisible ink?” I never forgot that house, and it inspired me to write a mystery series with a smart, funny teen detective. That quirky sleuth is Skylar Robbins.

How Did You Come up With Your Characters?
Skylar Robbins was born out of my own experiences as a curious kid who loved anything mysterious. When she get stuck at her bullying cousin Gwendolyn’s house for the summer, she meets an unusual classmate named Kat who claims to be a witch. My friends and I used to experiment with witchcraft in junior high: playing with an old Ouija board and making up love potions. I thought it would be fun to pit a teen witch against a feisty detective who didn’t believe in magic, and see how she reacted when the spells they cast in an abandoned garden actually began to work.

Book Sample
An oval mirror in a heavy frame hung on the wall next to the alcove, and I looked into it. My round blue eyes were bloodshot, and my nose and cheeks looked pink beneath the freckles. My hair needed brushing but I didn’t bother. Picturing Gwendolyn annoying me all summer and our Great-Aunt Evelyn’s “things” dusting the attic, suddenly I had to get outside into the fresh air.

I ran down the stairs, through the kitchen, and out the sliding glass door into the backyard. The cool ocean air smelled of salt and fish, like wet seashells. Behind the house, the left side of the yard was woodsy the yard was woodsy and crowded with weeping willows and evergreens. Gwendolyn liked to brag that her backyard was so big she didn’t even know exactly where it ended. A skinny stream trickled between the trees, disappearing down the hill on the far left side of the estate.

The middle of the yard had a swimming pool, and behind it, a stable. Next to that, the horse run where my aunt rode on weekends stretched toward the hillside. On the far right side of the yard there was a small guesthouse where the caretaker lived with his wife Rosa and his son Carlos. Between that and the main house, a large pen held loud mama and papa goats and two babies, called kids. The animals were Gwendolyn’s, and she’d told me more than once to keep my hands off them. She said if I pet them they’d bite me, even though she pet them all the time.

The goat kids were super cute. Sheba was a little big¬ger than Shena, and Sheba was black and brown, where Shena was all black. Sometimes Gwendolyn would put the kids on leashes and parade them around the back¬yard, pretending they were show animals. Once I even overheard her talking to herself like she was announcing, “Sheba and Shena: Queen Goats of the Parade!” Accord¬ing to my cousin, she was also the only one allowed to feed them snacks, like dried fruit. Hello. If dried apricots made goats’ gas smell as bad as mine did the one time I ate them, I’d stick to feeding my goats sugar cubes and grass.

Off to my left, the ocean roared and rumbled in the distance, and I could faintly smell it, fresh and cool. Past the end of the yard, the ragged Shadow Hills climbed toward the sky.
A curving row of pine trees grew near the back of the property. They were planted close together and stood straight and tall, as if they were guarding whatever was hiding behind them. I looked between two of the pines and spotted a row of steppingstones leading to a rusty metal gate. After slipping between the trees and hopping across the stones, I leaned forward and peeked through the gate. Then I just stared.

There was a strange and beautiful room on the other side.

The sun sank a little lower in the sky and the house¬keeper, Rosa, stood behind the kitchen window and rang the dinner bell. If only I had more time to explore! My secret spot would have to wait.

Author Bio:
Carrie Cross is an avid reader who fell in love with books as a little girl after reading Goodnight Moon. She wrote her first “book” at age four: Blackie the Little Black Dog and the Flying Washing Machine. Carrie discovered her love of mysteries reading Nancy Drew books and The Happy Hollisters series, and after writing THE MYSTERY OF SHADOW HILLS, she continues to look for clues in unexpected places to this day.