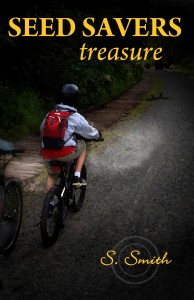 In a future where growing your own food is against the law, three young friends risk their safety by studying the illegal subject of gardening. The children’s mentor, an elderly acquaintance named Ana, entices the children with her description of the food she knew as a child–food unlike the square, processed, packaged food they have always known. Constantly watching, however, is GRIM, the government agency that controls the nation’s food source and keeps in check all potential troublemakers.

When Clare and Dante return home one day to find their tomato plant seized, and their mother jailed, they bolt, leaving behind Lily and Ana. Clare has heard of a place called “The Garden State,” and with their bikes, a little money, and backpacks, the children begin a lonely cross-country journey that tests them both physically and spiritually. Will they succeed in their quest to find a place of food freedom? And can they, only children, help change the world?

How is Writing In Your Genre Different from Others?
The Seed Savers Series combines adventure, politics, gardening, relationships, and good old fashioned bike rides. Both children and adults have enjoyed Seed Savers.

Author Bio:
S. Smith grew up on a farm with a tremendously large garden. She maintains that if you can’t taste the soil on a carrot, it’s not fresh enough. Although she now lives with her husband, children, and three cats in the city, she still manages to grow fruit and vegetables on their lot, as well as tend to a couple of egg-laying and friendly hens.

Smith has been writing since she could hold a pencil, although the lettering she left on her grandmother’s books sometimes contained a reverse capital R. In high school, she won awards for her poetry and short stories, and later was an editor on her college newspaper. Upon graduating with a degree in Communication Arts, Smith accepted a job at a small newspaper in eastern Oregon. She later declined the offer, choosing instead to teach English in China. Though she had an idea for a novel or memoir back then, the only writing produced were the many letters home detailing her exploits to friends and relatives.

After China, Smith spent many years teaching in private and public schools, filling hoards of notebooks with her writing–though mostly lesson plans. Along the way, she has written essays, newspaper articles, children’s books, and poetry, very little of which she bothered to publish.

S. Smith currently devotes more time to her writing, resulting in a weekly blog, two complete novels, and two more nearly finished. Ms. Smith is a member of SCBWI (Society of Children’s Book Writers and Illustrators) and an OSU Master Gardener. She gardens and writes at her home in the beautiful and green Pacific Northwest.

What Inspired You to Write Your Book?
I was inspired to write Seed Savers after watching the documentary, Food, Inc. and the story of Moe Parr. Mr. Parr’s occupation was a seed cleaner, and because of a lawsuit against him, it was unclear if he would be able to continue. I was struck by the fact that I had never heard of this job, and wondered about other things that might disappear and be forgotten in the future … Seed Savers:Treasure was born.