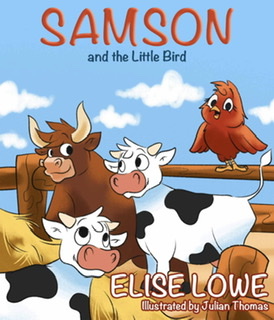 Samson is the strongest, scariest and angriest bull in the field. The other cows are terrified of him.

One day, a little bird lands in the field and sings her beautiful song. Samson demands that she leave, but the small bird refuses to be bullied.

Each time Samson loses his temper abs charges at the little bird, she outsmarts him, and he ends up hurting himself.

But can a bad-tempered bull be tamed by a brave little bird?

What Inspired You to Write Your Book?
Samson's character was born out of the idea of an angry playground bully except, in this story, he's the bad-tempered bull, who dominates the field and ruins everyone else's fun.

I created the little bird to stand up to Samson, but as well as being brave and smart, I also wanted her to be kind. She doesn’t give up on Samson despite his bad behaviour.

Book Sample
Samson was the strongest, scariest and angriest bull in the field.

He spent his days charging about the farm and picking fights with other cows.

Everyone was afraid of him.

One day, a little bird landed in the field.

“Get out of my way, little bird,” Samson said angrily.

“But I’m not causing you any harm,” replied the little bird.

The other cows watched on, fearing for her safety.

Author Bio:
Elise Lowe lives in London with her husband and young son.