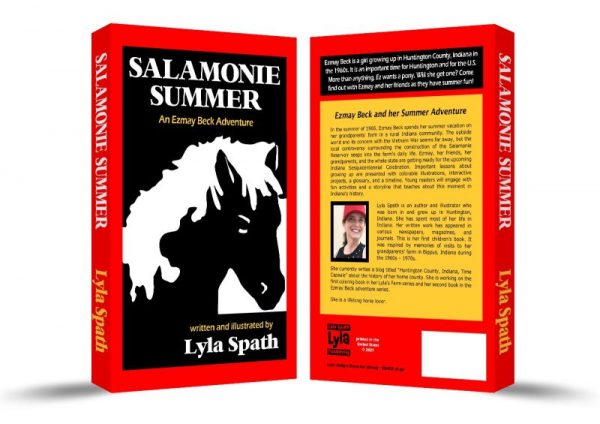 Children’s historical fiction set in Huntington County, Indiana, US. The story takes place in the summer of 1966 during the Vietnam War, Indiana’s sesquicentennial, and the controversial construction of Salamonie Reservoir. The character’ activities and places they visit are typical for children in a small rural Indiana community of that era. The main character spends her summer on her grandparents’ farm and gets a pony. She also learns important lessons about growing up. The book includes colorable illustrations, interactive activities, a glossary, and a timeline to help engage readers and to enhance the book’s use for teaching children about this time in Indiana history.

Book Sample
It was the last day of school. Everyone was excited. All they had to do was pick up their final report card, say goodbye to their teacher, and start having some summer fun.
¨Summer vacation, blah,¨ thought Ez, looking out the open window of her classroom. All of the windows were open, and the dark green roller shades were rolled up halfway. A strand of hair had escaped her ponytail and was tickling her nose. She absentmindedly blew it off her face. It was a hot day. She could feel the sweat trickling down her back. Her favorite yellow sundress was stuck to her like glue.
¨Good morning, boys and girls, ¨ Mr. Newsome, the principal, announced over the loud speaker. The Huntington Public Library has asked us to remind you that the Summer Library Reading Club starts today. For those boys and girls in kindergarten through grade five, we will see you this fall. Sixth graders will be going to Riverview Junior High School as seventh graders in the fall.
¨I hope everyone has a fun summer. Stay safe and remember what you learned. I enjoyed working with you this year.¨
Mrs. Walker, Ez’s teacher, told the class to stand for the Pledge of Allegiance, just like they did every day.
Ez stood with her hand over her heart facing the flag. ¨I pledge allegiance to the Flag of the United States of America, and to the Republic for which it stands, one Nation under God, indivisible, with liberty and justice for all,¨ she said in unison with Mrs. Walker and her classmates.
As Mrs. Walker handed out final report cards, everyone checked their desk one last time to make sure it was cleaned out and ready for whoever would sit at that desk in the fall. Ez hid her head under the top of her desk pretending to check it. The last day of school always made
her sad. There were tears in her eyes. She would miss Mrs. Walker and her classmates. She would miss going to the school library every week, and she would miss being librarian for her classroom.
¨I´m sure all of you have a very busy summer ahead,¨ Mrs. Walker
said cheerfully, giving the class a big smile. ¨Would anyone like to tell us what you’re going to do this summer?¨
Frank Smith raised his hand.
¨Yes, Frank, what are you doing this summer?¨ asked Mrs. Walker.
¨I’m going to YMCA camp again,¨ Frank said. ¨My older brother is a camp counselor this summer, and he’s going to help me with my swimming and diving so that I can be a lifeguard when I’m old enough.¨
¨That is exciting!¨ said Mrs. Walker.
¨Mrs. Walker, Mrs. Walker!¨ exclaimed Catherine Bowman, bouncing up and down in her seat. Without waiting to be called on, Catherine announced that her family was going to Disney Land in California.
¨Wow! Maybe you´ll get to be on TV on the Wonderful World of Disney!¨ Marcia Johnson said.
Now everyone was waving their hand in the air, eager to tell about their summer plans. Everyone, that is, except Ez. Ez folded her arms in front of her and tried to scrunch way down in her seat. She did not have any exciting summer plans. Since Dad had died, it had been hard for Mum and Ez.
Just when Ez was holding her breath and thought she was practically invisible, mean David Kline spotted her.
¨Ha, ha, ha! Look at Ez,¨ he said, pointing at her. The other kids turned to look. Ez was very embarrassed.
¨Look how red her face is!¨ David said. ¨Ez isn’t going to do anything all summer except sit on the sidewalk in front of her house with the little bitty kids waiting for the ice cream truck!¨
Now the whole class was laughing at her. Ez jumped up out of her seat.
¨I have a very interesting summer all planned out!¨ she said. ¨I just didn’t want to say anything because I didn’t want anyone else to feel bad because what I’m going to do is so…fantabulous!¨ Ez liked to make up words, especially long ones.
¨Will you tell us what you’re doing this summer, Ez?¨ Mrs. Walker asked. ¨I’m sure it is very interesting.¨ Mrs. Walker gave Ez an encouraging smile.
Ez gulped and her face got redder as she tried to think of something. Some of the boys started snickering and pointing as she stood there gulping.
¨I’m getting a pony,¨ Ez blurted out. ¨Yes, and after I get him, I’m going to train him to do tricks, and we’re going to be in parades.¨
¨A real pony? All your very own? Oh, Ez, that is so cool!¨ some of the girls said. Catherine Bowman looked doubtful, but she did not say anything. Ez was relieved.
¨I’m so happy for you, Ez,¨ Mrs. Walker said. ¨I know how much you like ponies. Congratulations!¨
¨Take lots of pictures of you and your pony to show us, Ez!¨ her friend Greg Brown said.
¨Thank you, Mrs. Walker,¨ mumbled Ez, sinking into her seat. Ez felt awful. She knew she had lied. Even worse, when she did not have pony pictures to show her friends, everyone would know she had lied. What if one of her friend’s moms told Mum? Then Mum would know she had lied, too. Her face began to feel warm. She felt like throwing up.
The bell rang, and everyone rushed out of Horace Mann Elementary School, ready for a summer of fun. Ez dragged her feet, staring at the ground.

Author Bio:
Lyla Spath is an author and illustrator who was born in and grew up in Huntington, Indiana. She has spent most of her life in Indiana. Her written work has appeared in various newspapers, magazines, and journals. This is her first children’s book. It was inspired by memories of visits to her grandparents’ farm in Bippus, Indiana, during the 1960s – 1970s.
Lyla has a B.A. in English from Huntington University and an M.A. in Journalism from Ball State University. She writes a blog Huntington County, Indiana, Time Capsule about the history of her home county. She is working on the first coloring book in her Lyla’s Farm series and her second book in the Ezmay Beck adventure series.
She is a lifelong horse lover.