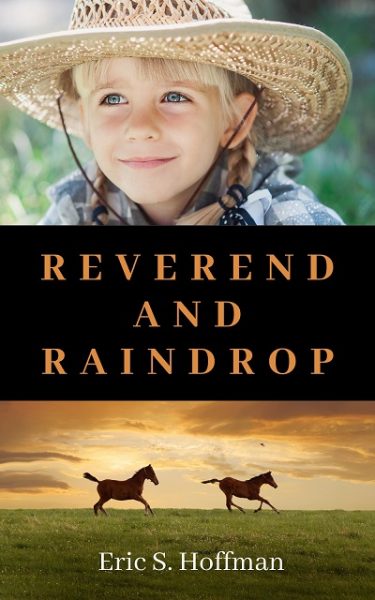 Eight-year-old Sue just wants to ride, but her parents insist she’s too young. When a powerful storm hits the family farm, suddenly Sue needs to take charge. With time running out, can this young cowgirl mount up and save the day?

Reverend and Raindrop is an adventure story about a young girl proving herself in a surprising way. Perfect for fans of horses, twisters, or anyone interested in farm life. Saddle up and enjoy the ride!

What Inspired You to Write Your Book?
I've always been interested in severe weather and tornadoes. I wanted to write a book a young child taking on a storm and finding herself in the process. This is a story I wrote in a flourish one day, and have spent the last few years honing it into something special.

Book Sample
When she reached the apple tree she was out of breath, and Tommy was already scrambling up the lower branches. The tree was an ancient relic, planted decades ago by the farm’s previous owner. It grew alongside the ditch, and the tree’s gnarled roots snaked toward the road.
Tommy climbed along a limb about eight feet off the ground. He reached for a bright red apple and plucked it from the branch. “Here’s a good one!” He yelled. “Reverend will love this.” He stuck the apple in his pocket and climbed a few branches higher.
“Tommy, we need to go back,” Sue protested. “It’s going to rain. Mom will be mad if she finds out you’re climbing again.”
The clouds were growing thick now, and the sun barely shone through. The wind was steadily rising, and it dried the sweat on Sue’s neck. She shuddered and looked to the west. The clouds there were very dark now, and she saw a distant column of rain beneath a growing storm. “It’s going to rain, Tommy! Come on!”
“Just one more!” Tommy called back. “I see a good one over here!” He ducked beneath some branches and shimmied out along a limb. He was probably fifteen feet above the ground now and had a prime apple in his sights. “I can almost reach it,” he cried. “It’s a fat one, just a little-”
He was cut off by a loud crack as the branch snapped beneath his weight. He yelped in surprise and tumbled through the canopy before hitting the ground with a thud.
“Tommy!” Sue screamed, and ran over to where he lay beneath the tree. “Are you okay?”
“My foot!” Tommy sniffed as he grabbed his right ankle, “I hurt my foot!”
Sue rolled up his pants to study the injury. His ankle was red and starting to swell. “It looks like you sprained your ankle,” Sue said. “Do you think you can walk?”
Just then the sky flashed, and a clap of thunder made them both jump. “Come on, Tommy. We have to get back to the house!”

Author Bio:
Eric S. Hoffman is a writer, a traveler, and a new father. He grew up in Ohio, but now lives in Kuala Lumpur, Malaysia with his wife and newborn son. Eric currently spends his days reading, writing, and playing peek-a-boo. This is his first published children's book.