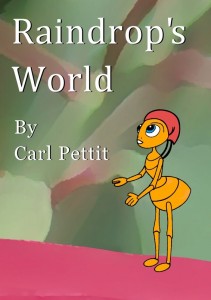 Raindrop’s World is a collection of illustrated vignettes that come together as a whole story. The individual stories, which include The Imaginary Armadillo, Raindrop and the Kapok Tree, The Beetle and the Tree Frog, and The Explorer’s New Home, tell the tale of two leafcutter ants and one very determined little beetle venturing out into the Amazonian Rainforest. They’re searching for an extremely old, and wise tree frog. Raindrop, the tenacious ant in charge of the expedition, urges her friends on. She has a long list of questions that she wants to ask this tree-dwelling amphibian, but with the onset of night, she might be disappointed. It’s up to Little Clay, the lone beetle among the ants, to carry on and find this enigmatic frog. When at last he does, the advice he gets isn’t what he’d expected at all.

What Inspired You to Write Your Book?
I wanted to write a children’s book that was fun and playful, but didn’t talk down to children at all. It’s the type of story that appeals to kids of a variety of ages — at least that’s the feedback I’ve received from school teachers so far — as well as adults. Raindrop’s World is a mixture of mischievousness, and sweet stories of friendship, taking place in a very exotic location — the Amazon rainforest.

Book Excerpt
Pollen was one of the loveliest, and least pushy leafcutter ants in all the rainforest, although on this particular occasion she could have used a bit more push. Her problem, you see, stemmed from the fact that she was dealing with a very polite, but stubborn beetle named Little Clay. This beetle, who often went by ‘Clay’ for short, didn’t really want to hear what Pollen had to say.

Most leafcutters have no problem bossing other insects around. If a simple command won’t work, a clever ant might employ some kind of clever trick, or else try to beguile another creature into following its lead. A leafcutter might even promise you a magnificent reward beyond your wildest dreams, if only you would tag along for an adventure.

Of course, more often than not, the ant in charge will fail to mention the numerous dangers you’ll likely encounter along the way. But then, what’s fun about knowing every tiny detail ahead of time? A lovesick bat or a deranged squirrel monkey can only take you by surprise if you don’t see them coming. If your heart isn’t pounding inside your chest now and again, it can’t really be counted as an adventure. It would simply be a leisurely walk in the park.

Little Clay knew what Pollen was up to. She was trying to convince him to do something that his heart just wasn’t into. At least she went about it in the most gentle of ways. He almost felt sorry for causing her so much frustration, but still, he simply wasn’t up for a long climb, as he’d already told her several times.
“Beetles,” Clay informed her, “are fond of the ground and damp leaves beneath our feet. We aren’t really built for climbing trees.”

“I’m only looking out for you,” Pollen insisted, “and acquainting you with our part of the forest. You’ll never learn about ants sulking around down here, and you won’t make any new friends. Just imagine all of the wonderful things you can see from the top of the Giant Kapok Tree.”

“You can see an awful lot of good things down here as well. Why, just the other day, I spotted a three-toed sloth drifting through the branches.” Then he remembered how sluggishly that sloth had actually been moving, and how tired he had become watching it swing through the trees. “It was a very large sloth,” he added, to make the story sound more exciting.

About the Author:
Carl Pettit is an American columnist, writer, musician and illustrator. He writes for an array of colorful publications, and also finds time to produce a fair amount of fiction for adults and children. Education and work, plus good old-fashioned curiosity have taken him all over the world. He’s lived in China, the Czech Republic, England, Korea and Portugal, and has traveled to dozens of more countries to boot. When not writing or working on his very rusty drawing technique, he’s most likely planning his next adventure, or out to dinner with friends.