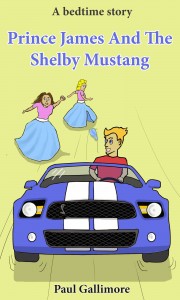 Prince James And The Shelby Mustang is an illustrated bedtime story for children aged 6-10.

Prince James has everything that a young boy could possibly want, including a fleet of miniature elctric cars that he drives around the palace grounds. What he does not have are friends of his own age. He longs to go to a school for ‘ordinary’ boys and girls, but his parents, the King and Queen, will not allow it.

This story takes the reader through the action and the consequences of an accident that the prince has in his favourite Shelby Mustang. The prince allows a trusty old footman to take the blame for his carelessness and the old man is fired as a result.

Finally the prince relents and owns up to the King about his part in the accident and both he and Wilkins, the old footman, are rewarded as a result.

What Inspired You to Write Your Book?
Previously I have written and published a full length novel for adults, The Mary Celeste Papers, which has sold well and has received excellent reviews, particularly in the UK where I am from.
For some while I have wanted to begin writing again, but time is an issue for me, especially for a full blown 300-page work. I decided that children’s fiction would be an interesting avenue to explore, as these can be considerably shorter.

Prince James And The Shelby Mustang is my first bedtime story for children; aimed at the 6-10 age group. I took the decision to do the illustrations myself, as I am reasonably artistic and enjoy Photoshop. I think that I pulled it off, but young readers will have to be the judge of that.

How Did You Come up With Your Characters?
I wanted to do a story about a child who had everything. Everything for me when I was a child would have been electric cars and toys of that ilk; things that could really capture the imagination and which a child can fully interact with.

The question then became, ‘who would be so lucky?’ One obvious answer was royalty; a child set apart from others,. Though high birth would obviously create some difficulties that an ordinary child would not have to overcome.

So, I borrowed one of my sons names, James, and created Prince James, as well as his faithful old retainer, Wilkins the footman. These two characters are joint leads in this story.

Book Sample
Once upon a time there lived a young prince called James whose family were rich beyond measure. Although the prince was still only quite a young boy he had more toys and things to amuse himself than a thousand ordinary boys.

The prince lived in a palace, which was 200 years-old, although inside it was very modern, indeed. For instance, there was under-floor heating in all the rooms so it was always nice and warm in the coldest of weathers. There was a swimming pool inside the building for when it was hot and there was a gym for the King and Queen to keep fit. There were also lots of computers in the palace and soldiers on standby to keep the royal family safe.

Apart from the soldiers, the palace employed a whole army of staff whose job it was to keep the royal family as comfortable as possible.

In particular, the prince had always been looked after by an old footman by the name of Wilkins. Of course, Wilkins had a first name, which was Horatio. He was very proud of his name, as his father had named him after a famous naval commander, but nobody ever called him Horatio. In fact, nobody at the palace even knew his first name, they just called him ‘Wilkins’, or ‘old Wilkins’.

Horatio Wilkins had joined the palace staff around ten years earlier, just after his wife died and around the time the prince was born. There were a lot of interesting things that people in the palace did not know about old Wilkins because for some reason they never did ask. It may be that people thought he was just old and boring, but in any case nobody paid much attention to him. He spent most of his free time walking in the palace grounds, or writing, or sometimes he posted videos on YouTube about his hobbies.

Wilkins wanted to retire, but he stayed at the palace out of loyalty to the young prince and because he was not really sure he could afford to retire, as long ago he had lost all of his money. This was something else that nobody at the palace knew; he was once quite wealthy.

The prince was schooled at home, so that he would not have to mix with common boys and learn ‘unprincely ways’, as his mother the Queen would say. Not going to school may sound like a fine thing on occasions, but it also meant that the prince had very few friends. Well, to be honest he had none, except poor old Wilkins, whom he never really appreciated or thought of as a friend. This was despite the fact that Horatio Wilkins would regularly play games with the prince and read stories to him and even help him with his studies – especially mathematics and science, which the prince sometimes found a bit hard.

The prince would plead with his parents to let him attend a normal school, so that he could make friends of his own age, but they always refused.

‘One day you will be King,’ his mother always told him. ‘I will not allow unprincely ways. You must stay here where we can help you to become kingly.’

In the mornings before his private tutor arrived Prince James, who was usually referred to as ‘James’ by his family and ‘Sir’ by the palace staff, would order Wilkins to bring his toys to him.

Author Bio:
Paul Gallimore is a semi-retired electrical engineer and has worked for several major companies, including GEC, Data General and Kodak.

Currently the author is spending more time writing, as well assisting his two sons in their business activities. One day each week he babysits his one-year granddaugher – which in his view counts as another major project.