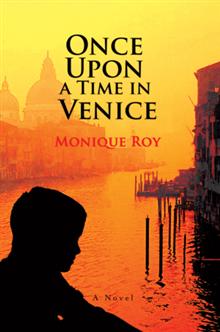 An intriguing, middle-grade chapter book that takes young readers, ages 9-12, on a physical and emotional journey to Venice, Italy.

This enchanting story revolves around the relationship between Samuelle, a young boy, and his grandfather Leo. Leo has learned that he suffers from a terminal illness, and in his wistful skimming of artifacts from the past, he uncovers treasured mementos of his earliest years growing up in the romantic city of Venice. Sharing them with Samuelle, he infects the boy with an infatuation for the city, one they will both share when Leo decides to accept an invitation to participate in the annual Regatta, a rowing festival that his own great-grandfather had competed in with great success. The two embark on their journey without Samuelle knowing about Leo’s illness, but Leo makes a promise to himself that it is in Venice, after he has passed on his knowledge and fondness for the city to his grandson, that he will reveal the truth about his fate. Venice becomes a special place in their hearts forever.

This beautiful, middle-grade chapter book will show young readers, ages 9-12, the strong impact and importance of family, love, and the community in our lives. Read this preteen book with your kids, grandchildren, nieces or nephews, and you will be instantly transported to the romantic city of Venice, Italy! The vivid descriptions of Venice enliven the story. From the food and the architecture to the art and the magical canals, you are right there in Venice, without the long flight and the icky airplane food! All adventurers wanted: preteen readers are taken on an emotional journey that is educational, sad, sweet and heartwarming, and opens their eyes to geography and cultures.

What Inspired You to Write Your Book?
It was my first book and I had traveled to Venice, Italy. The place was intoxicating and inspiring — the perfect setting for a cool children's story.

Book Sample
That night, Samuelle dreamed the house was floating down the Canal and out to sea to an enchanted world far away. A world much like Venice surrounded by beautiful islands and lavish palaces. Morning came quickly. Barely opening his eyes, Samuelle turned over and noticed how blue the sky was outside. Unaware of the time, his eyes shut again. The chirping of birds and someone whistling outside his window awakened him. Samuelle jumped out of bed and went to the window. He saw Anthony outside tying up his sandolo, the most common boat on the lagoon with a flat side and straight-cut stern. He was returning home from buying pastries and fresh coffee for breakfast.
Venice in the daylight is picture perfect. As Anthony steered the sandolo, Samuelle was star-struck by its beauty. Everything that Grandpa Leo had said about Venice was true. As they ventured on the Grand Canal, the main street of Venice, gondolas and boats were everywhere.
Grandpa Leo said, “Mark Twain once described the gondola as ‘free and graceful as a serpent in its gliding’ and the ‘gentlest, pleasantest locomotion we have ever known.’”
“The Rialto has always been the commercial heart of Venice and the first bridge over the Grand Canal was built here,” Anthony said. “Today, the area is still famous for its bustling fruit and veggie markets, but because of its central position, the bridge itself is neck-deep in stalls selling tourist souvenirs.”
Anthony continued describing the great city and its rich history. “The Piazzetta San Marco is overlooked by the exquisite Palazzo Ducale, for centuries the city's political heart. The pink and white Venetian gothic fantasy housed the doge, the many arms of government and prisons.”
Samuelle was stunned at the size and grandeur of St. Mark's Basilica, one of the most spectacular houses of worship in the world. Sparkling with incredible treasures, it is a mass of domes and arches, plunging with emeralds, rubies and gold mosaics.
On that day, Venice was packed with people awaiting the historic annual regatta boat race or Regata Storica. In the regatta, Venetians are paying homage to their ancestors who founded La Serenissima, the Most Serene Republic—Venice. The historical procession is followed by many decorated boats, which represent the city's various rowing associations. Music and cheer filled the air as a magnificent historical procession consisting of splendid, elaborately carved boats complete with hundreds of people in gorgeous XVI century period costumes lined the Grand Canal. Rowers were also clad in traditional white and black striped shirts. Large multi-oared traditional gondolas carrying gold and silver statues of dragons, winged lions and nymphs glided down the Canal. In front of the processional of 16th century style boats is the famous bucintoro, which represented the Serenissima. The doge’s boat, rowed by costumed Venetians, also opened the regatta race. Dozens of multi-colored ornate boats carried the highest dignitaries from the Venetian Magistracy, following the lead boats through the Canal. Then came the bissioni, the balotine, the magnificent and lavish ceremonial gondolas and the multi-oared boats belonging to the various rowing clubs. The feeling was of triumph, history and culture.
Crowded along the banks or in floating stands, the thousands of spectators filled the air with buzz and shouts of encouragement. On this day, Venice’s traditions of the past, present and future are celebrated.

Author Bio:
Monique's passion for writing began as a young girl while penning stories in a journal. Now she looks forward to deepening her passion by creating many unique stories that do nothing less than intrigue her readers.

Monique was born in Cape Town, South Africa, and her grandparents were European Jews who fled their home as Hitler rose to power. It’s their story that inspired her to write Across Great Divides, her first historical novel.

Historical fiction lets you escape to another time and place; and Monique likes to explore the past so that we can potentially better understand the future.

Monique resides in Dallas, Texas, with her husband and son. She also works as a freelance writer.