You are here: Home / Teen - Young Adult / YA - Biographies / Not So Happily Ever After: The Tale of King Ludwig II by Susan Barnett Braun 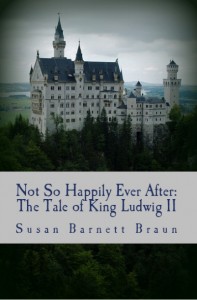 Think history is boring? Then you’ve never met Mad King Ludwig, who inspired Walt Disney with his magnificent castle in the clouds. He ruled the German kingdom of Bavaria for twenty-two years, inspiring his people by his support for the arts. And yet, “Mad King Ludwig” rarely appeared in the capital or attended any government functions. He slept most of the day and stayed awake all night. He dined with his horse and waved pistols at servants. He created a fantasy world inside his castles, complete with caves and trap-door tables. To this day, no one is sure exactly what caused his untimely death in a lake. Who was this man: fairy tale king? Insane eccentric? Mad King Ludwig’s life followed many twists and turns on its way to Not So Happily Ever After.

Author Bio:
Susan Barnett Braun grew up in the small town of Seymour, Indiana. She earned a BA in retail management from Indiana University and an MA in elementary Education from the University of Alabama. She taught elementary school for eight years in northwest Indiana. She wrote grant proposals which won a Lilly Endowment Teacher Creativity Fellowship and a National Endowment for the Humanities Summer Study Scholarship.

After becoming a mom to three daughters, Susan found her calling in the home for several years. But as her children grew up, she returned to the writing she had loved since childhood. She has had work published in Parents, Children’s Ministry, and The Teacher’s Mailbox, among others. She also writes online as a Featured Arts & Entertainment writer for Yahoo/OMG, and as a blogger at Girls in White Dresses.

What Inspired You to Write Your Book?
I’ve been fascinated with “Mad” King Ludwig since high school. A trip to Germany to visit his 3 castles cemented my interest. I have taught many students about Ludwig, but there didn’t seem to be any book about him geared toward tweens/teens. This is that book! Ludwig is just too interesting to be real — but he was!