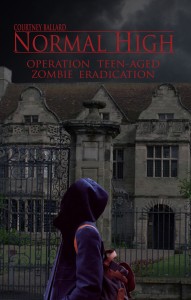 A Gothic mansion surrounded by a barbed-wire topped black metal fence is not your typical scene of teenage angst. But when you’re talking about Normal High School, you might as well throw typical out the window. Something strange is happening to the students of this very strange school and newcomer Tessa Wallace has made it her mission to find out what that something is.

When Tessa moved with her mom and sister to the sleepy little town of Normal,she had no idea how abnormal her life would become. That is until her older sister Trina began to change after starting at the local high school. Tessa’s not buying that it’s just a rebellious phase; not after she sees hundreds of high-schoolers acting the exact same way. But the closer she gets to the truth, the more dangerous things will become for everyone involved. Will she be able to find the answers in time, or will her sister become yet another victim of the high school’s nefarious history?

What Inspired You to Write Your Book?
I have always had a passionate love of reading since I was a very young child, but the one thing that always bothered me was the lack of interest my peers always showed towards books. So for a very long time, I have wanted to write a book of my own, one that could engage the reader, make them feel like a part of the world inside the book, and give them a deep connection with its characters. I truly believe that my book has what it takes to accomplish that lifelong dream: to inspire a passion for reading in young people.

But I didn’t just stand there gaping for long. I took all of this in within a minute or two, and then I squeezed in between two zombies about to walk through the gate. It’s not like it mattered; I’m sure they wouldn’t have noticed if I had climbed on their backs squealing like a monkey.

As we approached the security guard, I put on my best imitation of Frankenstein and hoped he wouldn’t notice me. I wasn’t so lucky. He stopped me with his big meaty hand and held it out expectantly. So I did what any normal teenager would have done. I slapped his hand and said, “What’s up, dog?”

“What is this, what are you doing, who is this dog?” he said in what sounded like a perfect impersonation of The Terminator.

“I’m giving you a five. That’s what you wanted, right?”

He looked at his hand, then back up at me and said, “I need your ID. Give it to me.”

“Oh, yeah, you know what?” I said while patting the pockets of my jacket and jeans, “I must have left it in my other pants, but you’ll let me slide this time, right?”

He looked at me suspiciously and asked, “What’s your name? I’ve never seen you before. No ID, no going in.”

Okay, that was no good, so I said, “Yeah, but my sister goes here and she forgot her lunch, so I thought I’d bring it to her. I see her right over there, can’t I just pop in there for a sec? Come on, it’s not like I’m gonna go snooping around or anything.”

“No ID, no going in,” he said as he folded his arms and glared at me.

I looked back at the growing line behind me and felt totally weirded out as I realized that everyone in line was staring at me. Any good sci-fi lover knows that once the zombies look your way, you’re dead meat. So I figured I might as well back off for now rather than invoke the wrath of the living dead, led by their dread leader Franz.

“Alright, but if my sister starves, it’ll be on your head,” I said as I slowly backed away from the line. Everybody kept their eyes on me until the security guard called for the next person in line, and then they all uniformly turned their heads back towards the school. Creepy to the max, seriously.

About the Author:
Courtney Ballard was born and raised alongside her three sisters, mother, and father in Southeast Louisiana. She currently lives near her hometown of Ponchatoula, LA, with her husband of ten years, her eight year old son, and a very spoiled giant puppy named Skips. Courtney has loved to read and write poetry and fiction since she was a small child and has always wanted to inspire the same love of the written word in other young people around the world. It is her dream to write books that will bring laughter, tears, and thrills to readers’ hearts and inspire a new generation of readers to dream again.