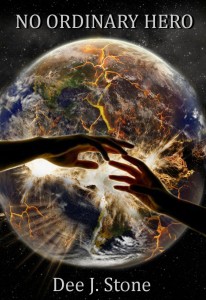 The world is set to explode in three months.

The source: a lonely girl with an extreme superpower fueled by the negative emotions inside her.

The solution: send fourteen year old superhero-in-training Kale Zenith to be her friend and give her a reason to smile.

The problem? The girl trusts no one.

With the fate of the world in Kale’s hands, quitting is not an option. Perseverance is key to knocking down the many walls around her, and soon he gets to know Lindsay as more than just the girl who will destroy the planet.

But there’s trouble back home. A secret plot is brewing inside his superhero league, and it’s up to Kale to expose the traitor. But that takes time away from Lindsay when she needs him most. Can he save her and the world before it’s too late?

That’s one hell of a fire.
X-Ray parks the jeep on the side of the road and the three of us pile out. The heat latches onto my skin. Smothers me. Maybe this isn’t such a great idea.
“We doing this?” Stretch asks, scratching his eye mask.
I stare up at the apartment building. They’re alive, the flames. I’ve seen infernos on TV, but standing fifty feet away from one is something totally different. Saliva gathers at the roof of my mouth, under my tongue, between my teeth. But I don’t swallow, because I’m not afraid. I came here for one purpose and one purpose only: tonight, I’m going to be a hero. Yeah, I’m fourteen and saying that makes me sound like a little kid. But I can dream.
“Let’s go,” I say.
The guys follow me as I edge closer to the last place any sane person would think of nearing. They huff behind me. Some firemen stand around, others hose the place down, a few are on a ladder. A group runs inside. Bystanders are around, too, as well as the cops and news reporters. Lights flash from the trucks and police cars.
I nod to X-Ray. “Anyone inside?”
He steps forward and squints his eyes. They get as black as his uniform. Looks freaky, like he’s possessed. He raises a hand to the top floor. “A girl and a baby. Trapped in the bathroom. Firemen can’t find them.”
“Is there a window?” I ask.
“Backside.”
We’re not supposed to be here. If word gets out, we’ll be in a crapload of trouble. But the guys and I are sick of sitting on the sidelines. Tonight we’re doing what we were born to do.
“Hang on,” Stretch says. He raises his arms over his head, stretching them along with his torso up the back wall while his lower body stays on the ground. X and I climb him like a ladder.
“Hey, you kids!” a fireman yells. But we’ve already reached the top of the wall, so it’s not like anyone can stop us now.
Phase one, complete. Now on to phase two.
I cough as smoke enters my lungs. Stretch slides over to the bathroom window, with X and me hanging onto his shoulders.
“Hurry up,” he says.
The heat makes me sweat in my uniform. Ashes cover us. It might be a problem having to explain the conditions of our uniforms to the League’s housekeeper, but forget about that now. I’ve got to focus on the civilians trapped inside. The baby’s screeching and the girl’s yelling for help.
I’ve got to do this, save them. Be a hero.
Sticking my fingers under the window’s ledge, I heave it open. The girl is crouched in the tub with the baby on her chest, and the shower curtain is wrapped around them. There’s hardly any air in here.
I jump down and am about to push out my chest and announce, “Kale Zenith is here to rescue you!” But I stop. Now’s not the time to show off.
I take the girl in my arms and she clutches tightly onto the baby. Her eyes are big and terrified, but I’ve never seen anyone so thankful. Like I’m her guardian angel or something. I hand them over to Stretch, who makes a blanket out of his body and tucks them close. X reaches for my hand to help me up, but just as I’m about to haul myself out the window, the flames blast the bathroom door open with so much force that I’m knocked off my feet.
My back crashes against the tub. Dammit! That hurt. My head rings like a million bells are vibrating against my skull. I can’t move anything. Are my bones broken? Crap. This wasn’t part of the plan.
“Get him out!” Stretch yells.
Too late. I’m burning all over. My arms, my legs. My face. I’m smoldering like the coals from last night’s barbecue.
At least I did one thing right tonight. I was a hero.

About the Author:
Dee J. Stone is the pseudonym of two sisters who write YA fiction. Their titles include No Ordinary Hero (Keepers of Justice, Book 1), Snake Girl, and Cruiser. Their hobbies include writing, reading, and playing video games.