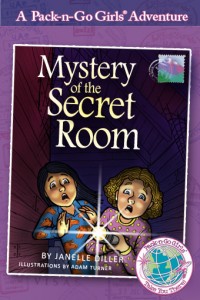 This is the second Austria book in the Pack-n-Go Girls adventure series. Brooke is still visiting her friend Eva in Austria

It’s raining so Brooke and Eva have nothing to do but play hide and
seek in the castle’s attic. It’s just an ordinary game on an ordinary
rainy afternoon. But then Brooke stumbles into a room everyone
has forgotten for decades. A beautiful porcelain doll sits at a table
set for tea for two.

It’s as if she has been waiting for Brooke and Eva to arrive.

What Inspired You to Write Your Book?
Traveling has always been a personal passion, not just because it’s fascinating to trek the jungles of Thailand or ride camels in Saudi Arabia. Traveling has taught me to be curious about the world and appreciate different cultures. I love the idea of getting young girls to be passionate about discovering the world, too. The more we shrink the world, the better we all are.

How Did You Come up With Your Characters?
Pack-n-Go Girls adventure books feature a young American girl who meets a girl from another country. Together they find out new things about each others’ countries and–most important–that every girl loves a true-blue friendship, regardless of the language she speaks.

Brooke could barely hear Eva’s voice as it drifted up the stairs into the attic. She should be tucked away in a hiding place by now. But she was still frantically looking for a good spot. She carefully moved some boxes to crouch behind. A spider darted across the new empty space. She jumped back and whispered, “Yikes!”

Did Eva hear her jump?

She held her breath and listened for her friend’s footsteps on the stairs.

The only sound was the rain tap, tap, tapping on the window. A door screeched opened on the floor below and Eva called in a singsongy voice. “Wo bist du?” Where are you? Brooke was happy her German was getting better. Eva had been teaching her phrases, which was a good thing. If she was going to spend time with her Austrian friend, she should be able to speak a little German.

It sounded like Eva had moved away from the attic door. That gave her a few more minutes to hide.

The cluttered room had a gazillion dark corners and even more shadows. White sheets covered furniture shapes. They seemed to glow in the grey afternoon light. If Brooke were cross–my–heart-hope–to–die honest, it was a little too spooky. Even though Eva’s ballerina ghost had turned out to be a trick Eva played, Brooke still remembered how scary it was to see the “ghost” in the attic window. After all, if a ghost did live in Schloss Mueller, this dusty old space would be the perfect place for it to hang out.

Maybe she shouldn’t have come up here to hide.

Too late now. She should have thought about this earlier. But she and Eva had hidden in all the good places already. The attic seemed like such a smart idea when Brooke was on the floor below.

Where the windows were big.

And the noises were friendly.

And there weren’t so many creepy, eepy shadows.

Brooke sighed. She opened the door of a tall wooden cabinet. Clothes. She should have guessed it was some kind of closet. Then it struck her. It was a wardrobe like in The Lion, the Witch, and the Wardrobe. She sniffed. The sharp, woody scent reminded her of a closet in her grandma’s house where she kept her winter sweaters.

She closed the door and glanced around the room again. Surely, somewhere in this room was a good—no, a great—hiding place.

Eva’s voice sounded like she was at the foot of the attic stairs. What if she noticed the door was slightly open?

Brooke only had three seconds. She yanked open the wardrobe door again and scrambled in. Better in here, she thought, than where the spiders live. Ever so quietly, she pulled the door shut behind her and tucked into a corner. A silky fur coat draped down over her and a man’s hat tumbled into her lap.

Eva’s footsteps crept up the attic stairs. “Brooke?” Her voice shook a little. “Are you here?”
Brooke giggled inside. This might be fun after all. Eva would never find her snuggled into this clothes closet. She felt safe from spiders and ghosts for the moment. Her back rested firmly against the side of the closet. She might even have the courage to say BOO if Eva opened the door.

She giggled again inside.

She could hear Eva poking around the room. Boxes scraped on the floor. Once she heard Eva shriek, “Ack!”

“Ahhh,” Brooke thought. “She found Herr Spider.” She scooted around carefully to get more comfortable. Several boards were missing along the back of the wardrobe. When she leaned back again between the missing boards, her head bumped something. A knob of some kind.
Quietly, she felt for it in the dark. It was smooth and round and about the size of a golf ball. It turned easily, just like a small doorknob.

How odd, Brooke thought. Doorknobs are for the outside of closets, not the inside. Cautiously, she pulled on the knob. A door—really it was just half of a door—opened. Brooke had an uneasy flash. Wasn’t this how Lucy ended up in Narnia?

Oddly enough, it wasn’t dark. Brooke could see a tiny bit of light, like there was a window far beyond the door. Well, she thought, at least it’s not snowing in there. It can’t be Narnia. She immediately felt silly for such a thought.

And maybe a little disappointed.

The clothes in the wardrobe pressed against the door, but she still tugged it open a tiny bit further. It took a minute for her eyes to adjust to the dim light.

Was it just a small, empty room? It had to be more, though. The light had to come from somewhere. Why would there be an old wardrobe in front of a door to another room?
What a PERFECT hiding spot, Brooke thought, except I’m too chicken to explore it.
“Brooke?” A floorboard squeaked on the far side of the room. “I see footprints in the dust. I know you’re up here. I’m not giving up!” The words sounded brave.

I can be brave, too, thought Brooke. She sighed inside because even as she thought it, she doubted it.

“Come out now!” Eva said. Brooke could hear her stomp her foot. “I know you’re more scared of the dark than I am!”

Brooke didn’t care that it was true. How dare she say that! She’d show her. She shoved the little door open far enough to squeeze through. She slipped into the space and softly closed the door behind her.

Slowly, her eyes got used to the low light. She seemed to be in a long and very narrow room, no wider than a couch. Above her, the low ceiling slanted toward what must be an outside wall. She thought she could almost stand up straight on the short side of the wall, but she couldn’t touch the ceiling on the high side. Up ahead, she could see light coming in from about halfway down the room.

Dusty sheets covered shapes of all sizes, just like it was in the rest of the attic. They lined the wall like ghostly soldiers. Brooke felt dizzy from her heart pounding so hard. But she crept through the narrow room toward the light. Where was it coming from? She bumped against a sheet–covered box. It tumbled to the floor, clanking like a bunch of silverware.

On the other side of the wardrobe, Eva called to her. “Brooke? I heard that. Where are you? You sound like you’re in the wall.” Her voice didn’t sound so brave anymore.

Brooke barely heard her, though. Only a few more steps.

Carefully, she felt her way through the dim hallway until she reached where the light came from. When she turned the corner, she couldn’t believe her eyes. A shiver ran from the top of her head to the tip of her toes.

“Oh my,” she said, barely breathing.

“Brooke! Are you okay? Where are you?”

“Eva!” she shouted back to her friend. “You won’t believe what I just discovered!”

Author Bio:
I’ve always had a passion for writing. As a young child, she wouldn’t leave home without a pad and pencil just in case her novel hit her and she had to scribble it down quickly. She eventually learned that good writing takes a lot more time and effort than this. Fortunately, though, she still loves to write. She’s especially lucky because she also loves to travel. It doesn’t get any better than writing stories about traveling! Janelle and her husband live on a sailboat in Mexico in the winter and in a house in Colorado in the summer.