You are here: Home / My Ex From Hell (The Blooming Goddess Trilogy Book One) by Tellulah Darling @tellulahdarling 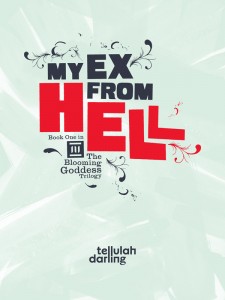 Prior to the Halloween dance, Sophie figures her worst problems involve adolescent theatrics, bitchy yoga girls, and being on probation at her boarding school for mouthy behaviour. Then she meets bad boy Kai and gets the kiss that rocks her world.

This breath stealing lip lock reawakens Sophie’s true identity: Persephone, Goddess of Spring. She’s key to saving humanity in the war between the Underworld and Olympus, target numero uno of Hades and Zeus, and totally screwed.

Plus there’s also the little issue that Sophie’s last memory as Persephone was just before someone tried to murder her.

Big picture: master her powers, get her memories back, defeat Persephone’s would be assassin, and save the world. Also, sneak into the Underworld to retrieve stolen property, battle the minions of Hades and Zeus, outwit psycho nymphs, slay a dragon, rescue a classmate, keep from getting her butt expelled from the one place designed to keep her safe …

… and stop kissing Kai, Prince of the Underworld.

My Ex From Hell is a romantic comedy/Greek mythology smackdown. Romeo and Juliet had it easy.

Targeted Age Group: YA ( suitable for 11 and up)

What Inspired You to Write Your Book?
I’ve always loved the drama of Greek mythology and stories with fresh takes on them. After my first novel Sam Cruz’s Infallible Guide to Getting Girls, which was a flat out romantic comedy suitable for the older end of the YA readership, my tween daughter told me I better write a book she was allowed to read. Since she loves adventures and mythology, it seemed like the perfect time to tell this story.