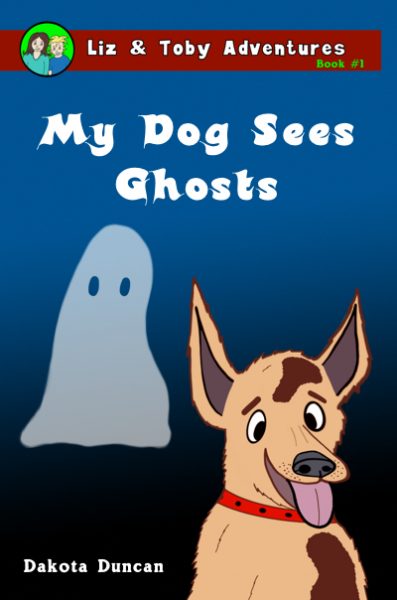 Liz and Toby are having a great evening until their dog, Fred, gets loose and runs directly to Pinewood’s most haunted location. They are determined to get Fred back, even if it means going into the creepy, old haunted house. What is it about the place that makes Fred so interested in getting in? Could it be the same thing that Liz and Toby fear will never let them out?

About the Liz & Toby Adventure Series
Liz and Toby are a sister and brother who love exploring the world around them and are always seeking new adventures. Liz is really smart and would do anything to keep her family members, even the furry ones, safe. Toby is very athletic and also passionate about their pets. Could their love of animals be attracting strange things into their lives? Until recently, Liz thought stories about ghosts and vampires were just made up to scare people, but with what she and Toby have seen lately, it might be that those stories are real!

Join Liz, Toby, their two moms, Melissa and Kim, their dog, Fred, and their cat, Sam for fun-filled, slightly spooky adventures in their hometown of Pinewood and in all the exciting places to which they travel.

What Inspired You to Write Your Book?
My book ideas tend to just come to me and I write them, so I don't know that there was a conscious inspiration. I think many pieces of my present life and my past helped this story come to being. I loved "adventuring" when I was a kid and I was especially intrigued by the idea of solving mysteries, so the fact these elements came together makes sense to me. The characters of Liz and Toby were inspired by my own resourceful, funny kids, though not really based upon them. The dog, Fred, is a combination of dogs I've known and loved, with a bit of his own zaniness thrown in as I got to know his personality.

Book Sample
“Fred!” Toby and I crouched down low to the ground and yelled through the hole in the fence. The backyard was huge and overgrown with grass, weeds, and bushes that needed trimming. There were some rusty metal chairs and an old table in the middle of a paved area. The entire backyard appeared to be fenced in, at least, what I could see of it. I didn’t see Fred anywhere. We continued calling him.

Toby got up from his spot on the ground and started peeking through the fence slats farther along the fence. I did the same, working down the fence in the opposite direction from Toby. We stopped yelling so we could try to hear Fred. We should at least be able to hear him dragging his leash around.

Just as I heard a rustling in the bushes that might have been Fred, a metallic creaking noise filled the air. A shiver went down my back and goosebumps covered my arms. I looked over at Toby and the look on his face told me he was creeped out, too.

“What is that, Zee?” he asked. ‘Zee’ was what he’d called me since he was very little and had trouble saying ‘Lizzy.’ My nickname for him is “Tobe” – rhymes with robe. I like when nicknames only have one syllable.

“I don’t know, Tobe. Maybe just something blowing in the wind.” My voice did not sound as confident as I had hoped.

“It’s not windy.” Toby had a good point.

“Maybe Fred knocked against something.” I liked that idea. “Let’s go see if we can see anything on the other side of the house.”

We ran across the front yard, hopeful we’d see Fred from the other side. As we passed by the front of the house, I tried not to think about the spider webs that had been built on the porch or the dirty windows and who might be on the other side of them. I thought I saw a flicker of movement through one of the windows near the front door. Even though I was hot from chasing after Fred, a coldness washed over me. I told myself I didn’t have time to be scared. I had to find Fred. I picked up my speed to catch up with Toby who was already on the other side of the house.

“Do you see anything?” I asked my brother.

“No, but I heard that creepy metal sound again.” He shook his whole body like he was trying to shake off the sound. I looked through a knothole in the fence.

“There he is!” I cried. “Fred, come here, boy!” I saw Fred look in my direction, but then he turned and stared at something towards the back of the house. He then put his front paws low to the ground, keeping his back end and tail high in the air. He let out a playful bark.

“It’s his play-with-me bark!” Toby yelled. “Someone must be back there.”

“Hello!” I called over the fence. “Hello! That’s our dog. Can we come back there and get him?” There was no response other than Fred barking and lunging forward and backward, trying to get whoever it was to play with him.

“Maybe they can’t hear you,” said Toby. At first, I thought that was ridiculous because I was yelling very loudly, but then realized he could be right. Maybe whoever was there was deaf or very old and didn’t hear well. Just then, Fred jumped up from his play position and ran towards the back of the house.

“Do you think he went inside?” asked Toby. The creaking metal sound started up again, sending another chill through my body. Toby looked scared. I had to be brave.

“Maybe. I guess we’ll just have to go knock on the door and ask.” Toby’s eyes got wide. “Come on. Let’s go get Fred.” I grabbed his hand and pulled him towards the door. I was determined to get our dog back, even if it meant talking to whoever lived in this creepy old house.

There were only four stairs up to the porch, but it felt like more as we slowly made our way up towards the front door. The top stair creaked loudly as I stepped on it, startling me so much I jumped a little. Toby looked ready to run, but I smiled a little, hoping to reassure him. He gave me a half-smile back, trying to be brave. The front door looked much larger up close than it had from the yard. Toby and I looked at each other and he nodded, letting me know he was ready. I knocked on the door.

It was a quieter knock than I had intended. Still, I waited and counted to 20. When there was no response, I knocked harder. Toby smiled, letting me know I’d done better that time.

“Do you hear anything?” I asked when again there was no response. Toby put his ear against the door. I stood still as he listened.

I raised my fist, intending to knock even harder this time. Just as my hand was about to hit the very solid front door, it slowly swung open. No one was there.

Author Bio:
Ms. Duncan is a member in good standing of the Oregon State Bar. She received her degree from Lewis & Clark Law School, where she earned a Certificate in Environmental Law. Ms. Duncan attended law school in her late 30's while working full-time and attempting to be home as much as possible for her two young children. Both of them knew they should fully read a contract before signing it prior to actually being able to read.

Ms. Duncan has turned her interest in the environment into writing and illustrating a graphic novel, "Endangered Species Superheroes." She hopes children and adults alike will enjoy the brightly colored adventure story while also learning a bit about some unique animal species.

Most recently, Ms. Duncan released the first books of a slightly spooky children's chapter book series, the Liz & Toby Adventures. These adventures feature a sister and brother whose love of animals may be attracting strange things into their lives. Until recently, Liz, who is the older of the two, thought stories about ghosts and vampires were just made up to scare people, but with what she and Toby have seen lately, it might be that those stories are real!