You are here: Home / Teen - Young Adult / YA - Literature & Fiction / Memoirs of an Ordinary Girl: The Middle-ish Ages by Terri Klaes Harper @DrewHotchner 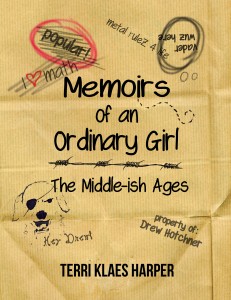 Set in the time while the ‘80s were fading into the ‘90s and the poofiness of hair and shoulder pads was soon to deflate, this coming of age story retells the experiences of Drew Hotchner, an “extraordinarily ordinary” girl, through her possibly wiser and more honest adult self. Drew struggles not only with the unavoidable awkwardness of being in middle school, but also with having to start over again her entire social world after experiencing the culture shock of moving across the country from California to Virginia.

Through Drew’s humorous adventures in trespassing, accidental theft, school dances, and throwing punches at her best friend, she must finally learn who she really is. And if you can admit you are also extraordinarily ordinary, just as Drew claims to be, that we all just want to know who we really are, and that sometimes we surprise ourselves along the way, this might be the book for you.

What Inspired You to Write Your Book?
I remember always hearing the advice to “write what you know,” so I sat down one day and started writing this fictional story based much off my own experiences, but embellished. There were no specific plans to even let anybody else ever read it because this book is such a part of me and I wanted to protect that vulnerability, but I realized it was a story others could relate to and I shouldn’t keep it to myself.

How Did You Come up With Your Characters?
Drew Hotchner, my protagonist, is sort of my alter ego, another version of me, so the rest of the characters are mostly at least loosely based off people I knew when I was in middle school, and they just happen to fit the common stereotypes. There are only three characters who are almost completely true to reality though: Drew, Belle, and Adrienne.

Book Sample
We’re Not in Kans…er, California Anymore!
As I attempted to pack, I realized I really didn’t know the first thing about Virginia. I knew it was summer there because we were in the same hemisphere, and from a made for TV mini-series my family greatly enjoyed, I knew that most of the Civil War had been fought there. Who says TV isn’t educational? I learned more US history from TV than the state of California ever taught me. Of course, every year I learned about the Roman Empire, Greek gods and goddesses, and how the Egyptians invented embalming. Fourth grade, fifth grade, and sixth grade textbook checkout time always revealed, through a quick glance at the table of contents, that Caesar would indeed get betrayed and murdered again each year. There was some sort of safety in this knowledge, but not in the unknown of Virginia. Who knew what the kids there learned in school!
Did they wear denim shorts and regular T-shirts, or would I need to wear plaid shirts and ropes for belts in order to fit in? How would my dad ever fit in out in the sticks without a beard? I couldn’t imagine him growing one out, but I figured he better give it a try. These were the only images I had of Virginia. Oh, and toothless grins. I was terrified.
As my suitcase lay open on my bed, T-shirts, denim shorts, and sandals went in. I crossed my fingers. My parents had just said they wanted to “check it out.” If we were terribly out of place or heard dueling banjos in the distance, I was sure they would not force me to move there. I was pretty sure they would have electricity, so I packed my hairdryer and curling iron. I had high hopes of indoor plumbing, but a small fear lingered in the back of my mind that I may also need my own toilet paper just in case I had to use an outhouse. I gambled that one and left the roll sitting on my dresser since my suitcase was already overflowing.

Author Bio:
For someone who loves to write, I never really know what to say about myself. I’ve lived a fairly “normal” American life, and I’ve been writing for about as long as I can remember. I started with stories about the origins of camels’ humps and strange planets one could only travel to while riding a flying cat, and now I keep a blog of randomness and have published my first book, which though it is a fiction tale, is quite based off my own middle school experiences.

Inspired by my own ninth grade English teacher (the one who discovered that my love for writing might actually be a hidden talent), I too became a high school English teacher, a chapter in my life I very recently closed. I am blessed with an amazingly supportive husband and two beautiful and hilarious Australian shepherds. I have a love of good literature and words and a hatred of human trafficking. I hope to continue writing fun fiction, but I would also love to put my talent to use to help battle modern day slavery. Other than that, I enjoy running, or rather the benefits of running, and long walks on the beach (cliche added on purpose). Seriously, I do live in Florida, but a part of me always considers Virginia, where I spent middle school through college, as my home.