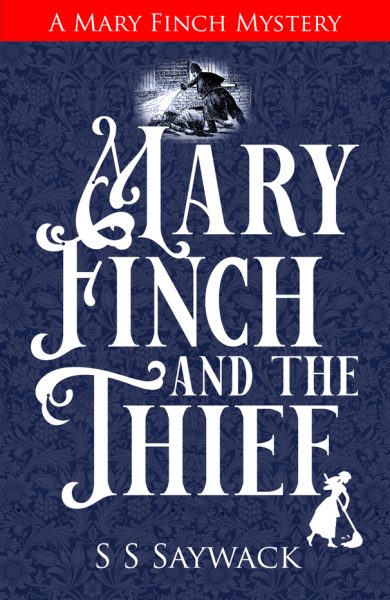 Mary Finch and the Thief is the first in the Mary Finch Mystery series. It is 1893, and Mary Finch finds herself on Victorian London’s violent and gritty streets trying to clear her name. When wrongfully accused of theft, she is determined to track down the thief and prove her innocence. Her journey takes her from Baker Street, where her friends, the famous detective Sherlock Holmes, lives, to the dark and dangerous East End of London. On her trail are the suspicious Inspector Lestrade of Scotland Yard, the evil butler of her employer, a mysterious gentleman who is not what he appears to be and a ruthless killer. Mary must hurry to find the truth before she is arrested and sent to jail.

“Mary Finch is a savvy and street-smart maid who has not had the best of luck but uses her wits, which impressed Sherlock himself, to solve a crime in which she has unwitting become embroiled. Mary tears back and forth across a beautifully recreated London piecing together the clues,” (Clay Kelly, author of the to be released book, Beyond the Doors).

What Inspired You to Write Your Book?
If I hadn’t studied Art and Design at university, I would have studied History. I find that period, from the mid-nineteenth century to the mid-twentieth century, fascinating. I thoroughly enjoy reading history books, as well as fiction book about that period. Apart from the works of Charles Dickens (everyone should read at least one of his books), I like the mystery/detective books of and about those times, and especially those set in Britain. Recently I have completed the Sinclair’s Mysteries books by Katherine Woodfine, set in the Edwardian period, as well as Susan Hill’s Woman in Black. My books, I hope, are similar to those in many ways. I also like to champion the heroine, hence my main character, Mary Finch, a fourteen-year-old maid, caught up in a world that is pre-eminently male, Victorian England of the 1890s.

Book Sample
Mary turned into Marylebone, still deep in thought. The street was empty at this late hour. She felt the cold biting and walked quickly along.

Something was nagging her. A feeling she could not place gave her cause to glance back. Someone was following her. At first, she thought she was mistaken. But when she turned again to get a better view, she saw him duck into the frozen gloom beyond the streetlights.

She waited to see if he would emerge. When he didn’t, she felt the cold nipping her nose and carried on walking, more quickly now. Anxiously, she glanced behind as she hurried along.

She saw him. He was some way back, a dark figure slipping in and out of the shadows, keeping his distance.

Soon, she was running. She fancied he was coming after her, and thought she could hear his feet crunching into the fresh snow. She clutched her bundle tighter and fled, fearful that the thief was chasing her to regain his spoils. Spots danced in front of her eyes as her heart thumped painfully in her chest. With panic rising inside, a sickening flood threatening to overwhelm her, she turned into Baker Street.

Somewhere, a bell chimed twelve clear notes that rang keenly in the cold night air. By then, Mary was standing in front of Archimedes Dibble’s Pie Shop. Panting hard, her breath a frosty mist in the air, she pounded on the door with balled fists and leant heavily against it, all the while casting a troubled, anxious gaze behind her.

She could not see him, whoever it was. But she could feel his eyes from somewhere in the shadows, spying on her. The windows of the shops and houses on Baker Street were all dark. All except those of number 221b, where Sherlock Holmes was burning the midnight oil.

Author Bio:
S S Saywack is the author of the Mary Finch Mysteries. Mary Finch and the Thief will shortly be followed by Mary Finch and the Grey Lady, and Mary Finch and the Spy. Born in Guyana, in South America, his family came to London in 1962. After school, he studied Art and Design and for many years had a career as a Graphic Designer before becoming an Art Teacher. At some point in his teaching career, he wrote short stories and flash fiction, before embarking on writing novels, in particular those for a middle-grade and young adult audience. He has a love of history – Victorian England and the early twentieth century, playing the guitar fairly well, and the piano fairly badly (he is blessed with very nice and tolerant neighbors). He is an avid reader of all types of fiction. He lives in the East End of London, a place well suited for his creation, Mary Finch, to explore and to have her adventures.