You are here: Home / Print Books / Legacy: Book One of the Resonance Tetralogy by Hugo Jackson 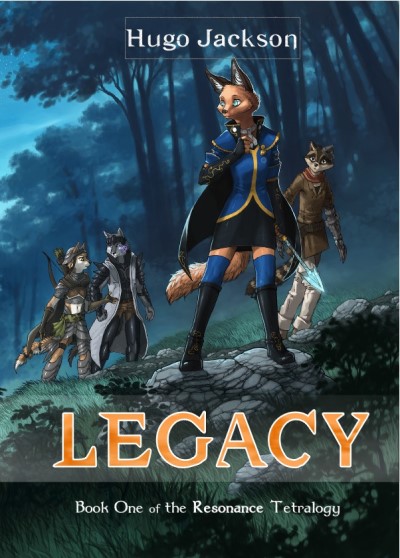 Her power is unmeasured. Her abilities untested. Her destiny inescapable.

Faria Phiraco is a resonator, a manipulator of the elements via rare crystals. It is an extraordinary and secret power which she and her father, the Emperor of Xayall, guard with their lives. The Dhraka, malicious red-scaled dragons, have discovered an ancient artefact; a mysterious relic from the mythical, aeons-lost city of Nazreal. With their plan already set in motion, they besiege Xayall, pummelling the city to find Faria and rip more of Nazreal’s secrets from her.

When her father goes missing, Faria has to rely on her own strength to brave the world that attacks her at every turn. Friends and guardians rally by her to help save her father and reveal the mysteries of the ruined city, while the dark legacy of an ancient cataclysm wraps its claws around her fate… and her past. She soon realises that this is not the beginning, nor anywhere near the end. A titanic war spanning thousands of years unfolds around her, one that could yet cost the lives of everyone on Eeres.

My book is a fantasy adventure about hope. It is an epic adventure about self-discovery, finding friendship, facing fear and disasters unlike any you have ever known, and seeing that you neither have to face it alone, nor are you powerless to submit to fear. It features battles, heroes and heroines, elemental powers, mysterious ancient secrets and disasters, giant machines, anthropomorphic animals, immense powers, heart, love, courage, and loss.

What Inspired You to Write Your Book?
When I was young I did not find many stories that fit everything I needed and wanted to see in an adventure. I spent a lot of time in my own head making adventures and imagining other worlds where bravery and compassion meant pushing against evil, and in places with more than just humans taking the leading roles every single time. I loved animals since I was very young, so I wanted to make my worlds full of animal people, and provide stories to kids and young adults that could teach them that hope and creativity don't have to vanish when you're an adult.

Once the meeting had finished, the delegates filed out of the amphitheatre, flanked by guards.
Aidan was shadowed by his bodyguard Kier, a younger fox with three white crystal earrings in each ear and bold, silver eyes. He had been standing behind his master for the whole meeting, and now he matched his pace to Aidan’s urgent stride as they marched to the outer wings of the building. Once they were out of sight, Aidan slowed dramatically. He let out a heavy, rattling sigh, massaging a pain in his ribs. The heavy blue imperial robes were tiring him as much as the debate had, the long sleeves and tight, high collar constricting his already weakening circulation. He ripped the headdress off and bundled it towards Kier’s chest. Hurriedly, he pulled open the collar of his jacket, allowing the oxygen to flow back into his lungs. His mind pulsed with the weight of the meeting.
“Are you all right, Your Majesty?” Kier said, taking his arm in support.
Aidan brushed him away, breathing through his teeth. “Yes, I’m fine, Kier. It was just… troublesome.”
“I did offer to go in your stead, Majesty,” the younger fox said quietly.
Aidan let out a slight laugh, his pain slowly subsiding to a dull ache. “This isn’t… something you’d be able to debate. You’d never be allowed to speak if you weren’t a Representative anyway. It had to be me…”
Compounding his worries from the Senate was the journey back to Xayall, at least two days by carriage. As soon as he returned he’d have to make plans to leave again, and Faria would not make it easy for him.
They rounded a corner and descended a set of large, sweeping stairs; this was one of the main entrances to the building. Aidan could hear the bustling of the citizens in the streets outside.
When they reached the large iron doors at the base, two bulky guards hauled it open, revealing the eminent city of Sinédrion laid out before them. A large river curved majestically around the Senate chamber, wearing luxurious bridges like a uniform of office.
Their carriage awaited them: an elegant design in dark wood with green and gold trim. Tall, horse-like dinosaur creatures with long tails, Theriasaurs, stood proudly at its head awaiting their command to move. The Xayall emblem, a white fox on a shield of blue flame, had been carved into the vehicle’s doors. A troop of mounted soldiers were stood to attention behind it; a silent, respectful welcome to their Emperor.
A footman held the door for them as they climbed inside, and seconds later the carriage began to move. For a while Aidan watched the shifting cityscape with a distant, grave expression.
“The world ended once already…”
“I’m sorry, Your Majesty?”
Aidan pulled a piece of parchment from a chest under the seat, along with a quill and a bottle of ink.
“Nothing. Kier, I need you to deliver a letter to a friend of mine in Andarn,” the older fox explained, his serious tone sounding all the darker in the half-light of the carriage. “We’ll stop near the city for you. I’m sorry, but it may take a while to find him.”
Kier nodded. “I will, Majesty.”
“I take it you still have my staff?”
The younger fox instinctively moved a hand to his back to check, even though he knew the Emperor’s charge was still safe in its cloth shroud. “Yes. Do you want it now?”
“No. But I’ll take it with me. Make sure you leave it when you go.”
“Yes, Majesty.”
The carriage fell into silence. As they passed through Sinédrion’s gates and the voices of the crowd subsided, Aidan let himself relax a little. The meeting had not filled him with optimism. He only hoped that his concerns regarding the Dhrakans would not be proved right. Xayall did not have the military strength to repel the dragons if anything were to happen.
The Emperor’s procession passed the city’s gates and broke into the forest. Some seconds after the last armoured creatures thundered away, a black carriage ground into motion, following in their tracks.

Author Bio:
I am is a British-born author living in North Carolina. I began life as a starry-eyed creature with a fascination for fantastical adventures, heroes, and animals, and invested as much time in their own imagination as they did on animations, video games, and music.

In my spare time, Hugo is heavily involved with the various online fandoms, including writing and fantasy animal groups, standing as an advocate for LGBT+ rights, mental health awareness, inclusion, and artist/author visibility and fair treatment. I talk about many of these things on their intermittently-updated blog, and occasionally produce YouTube videos and video game streams.