You are here: Home / Teen - Young Adult / YA - Science Fiction & Fantasy / Knightfall – Book 1 of The Chronicle of Benjamin Knight by Robert Jackson-Lawrence @RJLbooks 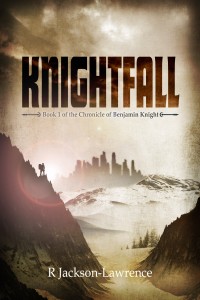 Lord of the Rings for the Call of Duty generation.

When his world changing experiment is sabotaged, fifteen year old genius Benjamin Knight is cast into another world where an uneasy peace hangs in the balance. Saved from near death by a band of traders, he joins the Road Trains on their journey north as he struggles to understand what’s happened to him.

However, Ben soon realises that everyone has their secrets and that no one is safe, especially when one man has the power to realise his ambitions.

Friends are lost, plots revealed and battles fought as the unlikely companions seek to prevent war.

Author Bio:
A fan of writing since he could first hold a crayon, R Jackson-Lawrence has had a tortuous path before reaching this point in his life. In between working in a supermarket, care home and hospital, and having a family, it took nearly twenty years for his first book to be finished. Weirder still, after only three months his second book is half done!