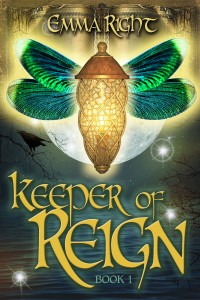 Books written in blood. Most are lost, their Keepers with them. A curse that befell a people. A Kingdom with no King. Life couldn’t get more harrowing for the Elfies, a blend of Elves and Fairies. Or for sixteen-year-old Jules Blaze. Or could it?
For Jules, the heir of a Keeper, no less, suspects his family hides a forgotten secret. It was bad enough that his people, the Elfies of Reign, triggered a curse which reduced the entire inhabitants to a mere inch centuries ago. All because of one Keeper who failed his purpose. Even the King’s Ancient Books, did not help ward off that anathema.
Now, Gehzurolle, the evil lord, and his armies of Scorpents, seem bent on destroying Jules and his family. Why? Gehzurolle’s agents hunt for Jules as he journeys into enemy land to find the truth. Truth that could save him and his family, and possibly even reverse the age-long curse. Provided Jules doesn’t get himself killed first.

Book Excerpt
THE WARNING GRANDPA gave had frightened Jules then, as it did now.

“Jules, the days are coming,” Grandpa Leroy had said, that bleak day as they sat before the fireplace. “One day, Gehzurolle will intensify his efforts against us. Beware of that day.”

Picking up his Ancient Book, Grandpa read, “Suspecting the lives of the now insignificant Fairy Elves will be restored to the former glories they once enjoyed, the Scorpents and their leader, Gehzurolle, the Lord of Shadows, will be driven to distraction. After many failed attempts to annihilate the Race throughout the centuries, Gehzurolle will scheme to extinguish every inhabitant of the land because finally a Keeper has invited him into our Kingdom. He will spare no Elfie. Not even those who work for him.’”

“One who’s desperate. When you see the signs, Jules, you must flee. You and everyone in our family. Immediately!”

“Because it means he’s close to succeeding. He will seek us Keeper families first because without the Keepers and our Books our Kingdom cannot survive. I entrust this knowledge to you for you will take over from your mother as Keeper of the Book, just as she’d taken over from me.” His grandfather’s gentle blue eyes locked with Jules’s own green ones.

“But how will I know when this will happen?”

“The Ancient Book says thieves will come to steal—so beware. But these are no ordinary burglars, Jules. They will destroy everything in their path. Whatever happens they mustn’t get our Book.”

How is Writing In Your Genre Different from Others?
I love the Young Adult/Middle Grade age group and I actually write in more than the fantasy genre. Take Keeper of Reign for instance, it’s fantasy, but it’s also an adventure and survival story. There is even mystery in it. So every genre cross–pollinates each other, so to speak. Also, take my next YA fiction, Dead Dreams. It’s a psychological thriller and a mystery, but there are also elements of paranormal in it. Fiction is like life– so many different “genres” fitted into one life. The main reason why bookstores and publishers need to know “genre” is because they need where to categorize the book.

What Advice Would You Give Aspiring Writers?
Write a million words, read, read, read, and write a greta story that’s been trying to bust out of you. And never give up on your dream no matter how many problems life throws at you! You’ll eventually get published.

Author Bio:
Emma Right is a happy wife and homeschool mother of five living in the Pacific West Coast of the USA. Besides running a busy home, and looking after their five pets, which includes two cats, two bunnies and a Long-haired dachshund, she also writes stories for her children. When she doesn’t have her nose in a book, she is telling her kids to get theirs in one.

Right worked as a copywriter for two major advertising agencies and won several awards, including the prestigious Clio Award for her ads, before she settled down to have children.

What Inspired You to Write Your Book?
When I first heard the Switchfoot song , “Meant to Live” (for so much more) it got me thinking about how far short many of us fall from our true potential. The trials and troubles of this world reduce us, and for me, most days, I feel overwhelmed, and it feels that the troubles of this world is so big. Too big. That was what Jules Blaze, the protagonist of Keeper of Reign felt. but he persevered and even though things did get worse for him, he never gave up. He kept trying and that’s the message I would like young people to realize. If you keep trying, you will succeed.