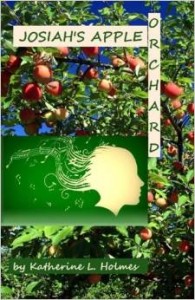 Besides music, Vivvy loves green apples. She and her brother Matt go on morning apple raids until, one fall, their father drives them to a pick-your-own orchard. The cross old Josiah inhabits another time where pixies might appear like uprooted saplings.

In the early, eventful 1960s, Vivvy takes the flute from Mr. Fortray, a band teacher who plays jazz. Detours confuse another apple picking trip and Josiah is angry about progress. Yet if Vivvy wants to do what she loves, she must think beyond a fear that her father and Josiah share.

What Inspired You to Write Your Book?
The excursions I took with my father and family to a pick-your-own apple orchard in Wisconsin. What happened with the orchard was also a definite plotline.

How Did You Come up With Your Characters?
Josiah was based upon a real farmer however I didn’t remember him very well. That inspiration became the fictional character. I invented Matt in the story and fictionalized the parents.

Book Sample
Matt was practically rude to him. He arched his chin and said, “What do you do with the Northern Spy apples?”
“Why do you ask such a question?” Josiah demanded.
“Those are prize apples, Matt.” Dad motioned for Matt to tote the crates from the trunk of the car.
“What would a Northern Spy cost?” Matt said. He stood with a crate between him and Josiah.
“They cost me a lot of effert. They always get the prize in the harvest fest.” Then Josiah peered at Vivvy out of his filmy eyes. “Who ye be? I spose ye came ta see the Northern Spy tree!”
“I’m the girl who came last year. Vivvy!”
“No, ye don’t have a face like a boy.”
“I got my hair cut. It’s a girl’s haircut. A pixie haircut!”
“Eh? The pixies cut yer hair like that?”
“No! Mr. Tiederman did. He’s a hair stylist. The haircut is called a pixie haircut.”
“Did the pixies come fer you? They be uprooted an’ not bigger than saplings.”
“Do they live in Mystery Cave?” Vivvy wondered.
“They bin chased out!” Josiah roared out.
“Now we’re here to pick apples,” Dad said. He pointed at a crate for Vivvy to carry.
They passed through the gate at the KEEP OUT PIXIES DEER sign. Josiah watched Matt leaping up to catch a branch of a pippin tree.
“Did you play an autoharp last year?” Vivvy asked Josiah.
“Eh? Play?”
“When did you learn to strum?” That was like the question people asked Mr. Fortray because he could play a number of instruments. Vivvy couldn’t decide whether Mr. Fortray or Josiah had the worse temper.
“I learnt the zither when I were a youngster. Didn’t like to sing. They all sang holy songs then.” Josiah leaned on his shovel and stared at Vivvy.
“I can’t sing very well either. Someday I’m going to play the piccolo.”
“Ye’re gonna run away with the pixies? All’s they do is dance and take the fruit fer their feast. It’s wicked, it is.”
“Wicked?”
“Wicked works. I seen them outside the orchard.”
“We saw a freeway being built today,” Vivvy said.
Josiah had been conversing almost amiably. But now his shovel jabbed the ground. He looked so threatening that Vivvy helped Matt carry a stepladder. Dad was collecting crab apples.

Author Bio:
Katherine L. Holmes lives in Duluth, Minnesota, where, besides writing, she works with used books. She has an M.A. in Writing from the University of Minnesota, obtained after stints in publishing and newspaper reporting. Her first published book, The House in Windward Leaves, became a Finalist in both the 2013 Next Generation and the National Indie Excellence book awards.