You are here: Home / Teen - Young Adult / YA - Biographies / Jew in Jail by Gary Goldstein 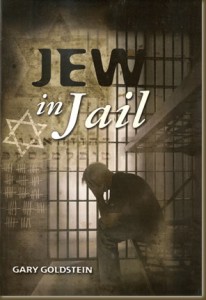 Jew in Jail is about the nearly six years I spent in various New York State prisons for robbery, based on my past addictions to alcohol, drugs and gambling.
It details all of the trails and tribulations I experienced as a minority behind bars, and how I was forced to fend for myself while incarcerated.

Jew in Jail is truthful, insightful, educational, and at times even funny, all the while focusing on my attempts at rehabilitation from my past addictions, so that I could lead a productive, law-abiding life upon my eventual release.

Jew in Jail is recommended for anyone suffering from an addiction, a family member, friend, loved one, or co-worker of such a person, or anyone living with low self-esteem and self-confidence who is interested in a better way of life.

Author Bio:
I came into the world on October 18, 1961. John F. Kennedy was President of the United States. The film West Side Story was released, and would go on to win Best Picture at the Academy Awards. Major League Baseball was celebrating Roger Maris of the New York Yankees, who hit a then-record 61 home runs that season.

I was an excellent student, although a bit of a class clown too. I spent a majority of my time playing sports, but fell in love with newspapers, which was how I was initially introduced into writing and storytelling.

While attending Kingsborough Community College from 1979-1981, I served as editor-in-chief of the school’s paper, and then joined the staff at Long Island University’s Seawanhaka for my junior and senior years. At L.I.U. where I earned my Bachelor of Arts Degree in Journalism in 1983, I was also a selected member of Sigma Delta Chi, as well as Who’s Who Among Students in American Universities & Colleges.

My last year in college included an unpaid internship at WCBS-TV, Channel 2 in New York City, where I learned so much about the television business. Upon graduation, I landed a job at the network, starting as a news clerk for The CBS Morning News with Diane Sawyer, and also weekend shifts for The NFL Today with Brent Musburger.

After quickly rising in the ranks to producer, my life suddenly went on a downward spiral due to addictions to alcohol, drugs and gambling, which ultimately led to nearly six years behind bars for robbery.

My time incarcerated gave birth to my first published book, Jew in Jail, which tells my true story of how I finally decided to deal with my addictions and turn my life around, all the while under the toughest conditions imaginable of being a minority in the prison system, forced to fend for myself.

Writing Jew in Jail – as I was doing my time – allowed me to become very introspective, and realize that I could help others in similar situations of being an addict and/or living with low self-esteem.

Today, I still reside in my hometown of Brooklyn, New York, where I am working on my next book project, continuing to promote Jew in Jail, and always helping other addicts through my motivational and inspirational speeches, and one-on-one consultations.

What Inspired You to Write Your Book?
I have always wanted to write a book, although, obviously, not under these conditions of becoming incarcerated. However, once I knew that my fate was going to be serving time in prison, I decided to write Jew in Jail, and was inspired to do so once my beloved late father, Irving Goldstein, passed away from the effects of lung cancer and emphysema on January 23, 1999, which was only 15 days after I had been sentenced, and still on Rikers Island waiting to be transported north to a correctional facility. My father had always encouraged me to be my best, and offered unending support my entire life, so I wanted to honor my father by dedicating Jew in Jail to how special my father was to me.

In addition, the other reason why I wrote Jew in Jail was to show anyone that whatever obstacles appear in one’s life – and in my case it was the disease of addiction – it is possible to overcome them and go on to lead a positive and fruitful life. These days, aside from being a published author, I am also a motivational and inspirational speaker on the topic of recovery from addiction, and get so much out of helping others.