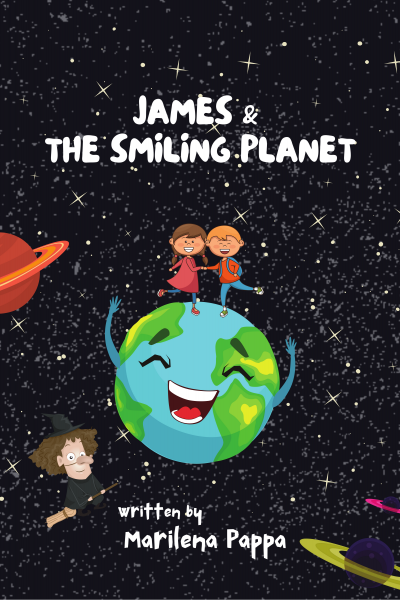 The battle with the brushes between God Varvas and the hideous witch Coumara is endless. The Universe is fighting, but the witch seems to be gaining ground. The smile of the Earth is slowly sinking into the calamities that Coumara is painting on the planet with her magic brush. Is the plan of God Varvas efficient to save the planet? Will two young children be able to restore the Earth´s happiness having as weapons, just their magic colors and pure hearts? The journey to the bowels of the world has just begun. While this is an adventure story full of magic, mythical landscapes, painting and laughter, it teaches children that no matter what kind of difficulties you go through, you can always make it if you believe in yourself. The fable addresses bigotry, greed, friendship, loyalty and kindness to others.

What Inspired You to Write Your Book?
I originally wrote this book in 2009. Back then I was madly in love, but there were so many barriers that wouldn't let me express my feelings. So, I transformed everything I was feeling to a story of magic, paint, stars, a whole new universe, making a planet smiling – hoping that the planet would smile back at me.

-James: I hate that snotty Mandy! What is it that she wants and she's after me all day long?

-James’ mom: What are you talking about, my son? Mandy considers you as her best friend! She cares about you!

-Mandy: James, where are you?

That's how our heroes’ life went by until one icy spring morning arrived and God Varvas (enormous as a five-storey apartment building and black as the midnight sky) wanted to play a little bit with the threads that define people's lives. Every thread represented a human life. You can only imagine how the universe was full of threads!
Huge and colorful, spanning to the infinity. Countless strings in which God Varvas rested his fingers and played the melodies of the air, the rustling of the leaves, the wave on the shores.
He was playing and was creating the most beautiful songs in the world. He was feeling happy that we could create the most unique sounds. He was playing until he accidentally cut one without wanting to. He then tried to re-stick it with some saliva and pink gum, but his effort was in vain. The thread had already been cut and the piece that connected the two cut ends had evaporated somewhere on Earth. In a place where the creatures of the universe are not allowed to enter, so that people do not realize their existence.
So, God Varvas leaned on Earth to see all the sorrow and pain he had caused. He fell upon the sky and darkened it with his black tears painting every white cloud black. Exactly how little James’ soul went dark.
Ever since that day James doesn't talk to anyone, he doesn't laugh, he doesn't play basketball – the game he loved so much. He only remembers his dad's red thread and cries.
James’ mom stands strong, but she is crying at nights and blames the unfair fate that stole away her husband.
Mandy stays home sad. She’s only thinking of her friend. James doesn’t talk to anyone since the day of his big basketball game. She recalls that day and smiles. It was the most beautiful day of her life.
She was sitting in the gray stands of her school, wearing her favorite orange dress, waiting for the big game to start.
It was the first time that James was playing a key role in the school basketball team. She wore the best dress she had and prayed that her beloved friend would do well and succeed many baskets in order to give a good lesson to Tasos, the leader of the team who was making fun of him.
As a matter of fact, once, Mandy, was so irritated that Tasos and the rest of the boys had scattered James' books in the schoolyard, had thrown a whole handful of itchy dust into their bags. The whole school then laughed at them.
Finally, James appeared. He was wearing the gray-yellow school uniform and looked like a prince in her eyes. Mandy started shouting at him to wish him good luck, but he continued to move towards the coach's bench, ignoring her.
After forty minutes of hard game, Tasos passes the ball to James three seconds before the end of the half time and while his team was one point behind the opponent. Without thinking, James shoots and becomes the hero of the game.
At the same time that God Varvas, was holding the blue thread of James and the red of his dad, accidentally pulls the second a little more than he should and breaks it.

Author Bio:
Marilena Pappa is a Greek writer. Born in Athens in 1988, she studied Public Administration and Communications and Journalism. She has published books for children, poetry collections and literature for adults in Greece and Cyprus, while she has translated children´s books from English to Greek. She was nominated for Best Children's Book in Cyprus´ State Literature Awards in 2013. Her children's book "James & The smiling planet" that has originally published under the title "Ο πλανήτης που χαμογελά" in 2010 has been transferred as a theatrical play. She has collaborated with cultural websites as a columnist, writing book and theatrical reviews.