You are here: Home / Free and Bargain Books / Kindle Unlimited eBooks / In Case We’re Made into Coats by Tessa Charleigh 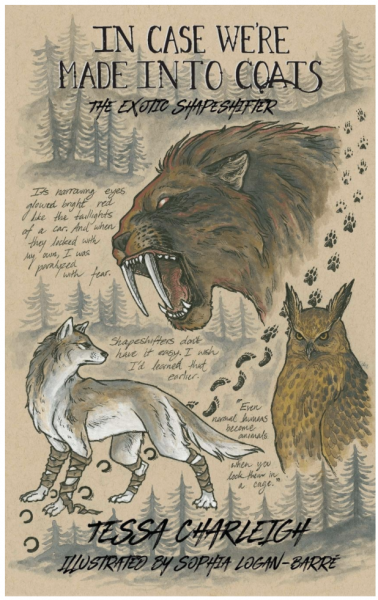 What if you had to live in fear? What if one encounter with the wrong stranger could result in your body being made into a nice, fuzzy pair of transforming moccasins? And what if you had an incurable medical condition, that caused you unbearable pain every time you tried to change forms? My name is Chase, I’m a 16-year-old shapeshifter, and that would be my life. Well, minus the inconsistent homes, abusive adults, and friends that share (some) of my same circumstances. This is the story of how we ran away, how I ended up where I am, and everyone who’s to blame.

What Inspired You to Write Your Book?
The In Case We're Made Into Coats series was inspired by the desire to humanize shapeshifters as a species, as well as explore the other aspects of life that it would inevitably impact. "There's no way they would go through such drastic physical changes, without some mental and emotional repercussions."

Book Sample
My name is Chase Wagner. I’m a sixteen-year-old shapeshifter, writing this in case I die here in Louisiana and no one knows what me and my friends have been through. Today’s date is May 8, 2019, but I’m sure it’ll take me more than a couple days to write all of this down.
However, before I get into all the madness that happened this past week, you probably need some background information, and when and if I get to see her again, I’m going to ask my friend Angela to write in some of the parts of our story, parts where I may not have been present or conscious, before I send this out for some kind of publication.
I’m gonna try and speed through most of this “past” stuff, because there’s a ton to explain and quite frankly, I’ve blocked a lot of it out. That being said, I think I’ll start by going back a couple years to the day I lost my freedom.
I was fourteen at the time and probably gave off the overall appearance of a crazy homeless teenager, with my once brightly colored (now faded) shorts and worn black jacket. I was living by myself at an unspecified hotel on the west side of Jackson, Mississippi. Well, unspecified to me at least. It wasn’t worth bothering to remember the name of the place, considering how much I moved around. Just the week before, I had been sleeping behind the large burnt-out W of a Walmart sign. Man, times have changed. I still haven’t decided whether it was for better or worse, but I was pulled away from my life of living alone when I was forced to go to the drugstore in search of more bandages.
Just getting to the store was a victory in itself. My legs were hurting horribly, and I knew at least one of our traffic-patrol officers at the hotel had a gun. As irrational as it sounds to be afraid of someone just because they were armed, I think my fear was justified by past experiences.
Shapeshifters don’t have it easy. I wish I’d learned that lesson earlier. We’re constantly being pursued by a group of people commonly referred to as huntsmen—psychopathic killers hell-bent on capturing shapeshifters at any cost, and at the time I didn’t even know why. Come to think of it, I didn’t even know what they were called.
Apart from huntsmen, I didn’t think anyone else was aware of our existence. People who did know about us probably never talked about their encounters openly, considering the very idea of a teenager suddenly turning into a pheasant and flying away would make them come off as crazy. It’s not like we could risk befriending too many “normal” people, either. Talking to strangers was risky and usually got me chased from whatever temporary accommodations I had by some madman with a gun.

Author Bio:
Tessa Charleigh currently resides in Indianapolis, Indiana. She comes from a family line of doctors in varying medical fields and broke that line to become a writer. Tessa was raised in her mother’s exotic veterinary clinic, gaining her unique life experiences and knowledge that she likes to integrate into her novels. Her series, In Case We’re Made into Coats, was inspired by the desire to humanize shapeshifters as a species, as well as to explore their position on matters such as health and habitual life.