You are here: Home / Children's Books / I Will Fly – The Green Fin Fish Story by Elan Ezra 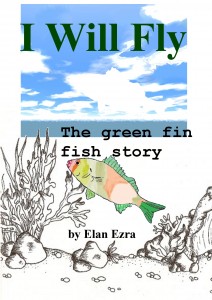 I Will Fly is the story of a fish named Joel, who watches the birds fly through the air above him, and wishes that he could join them. Of course Joel can’t fly because he’s a fish, but that doesn’t stop him from trying, and concentrating, and believing, until one day Joel grows wings and joins the birds in the sky.
The other fish find him somewhat unique in this quest but Hosea has faith in him.
But what would happen when a fish leaves his natural environment for too long? Joel must return home or he will suffocate out in the open air.

What Inspired You to Write Your Book?
The story begins in the spring of 1995. England. That where Joel was born – in my head.
The story began with the phrase “I will fly”, which pop in my head from nowhere.

How Did You Come up With Your Characters?
After this phrase – “I will fly” appeared in my head, I saw a fish. And then, step by step I built the whole story from beginning to end, and I wrote it down on a piece of paper. When writing it I saw the lake, with Joel, and his friends swimming with him.

Book Sample
One day while playing with his fish friends, he told them he wanted to fly, and his friends laughed at him a bit. “Since when can fish fly?” They asked him, “Fish swim in the water, and birds fly in the sky. That’s the way nature is.”
But Joel thought otherwise. “I will fly. You’ll see!”
Only Hosea looked at him admiringly. He was very proud of his friend, “Joel’s really brave” he thought to himself.

Author Bio:
Elan Ezra (1973-now) born in Tel-Aviv, living, since 1994, in Netiv Halamed-Hei (a small village), Israel. When he was 21 years of age, he worked in a kindergarden for 2 years, and one of the things Elan used to do, is reading stories for children. When he ran out of good children’s books, he invented stories for the children. Now, when Elan has his own children he tells his children those stories, and write some new also.