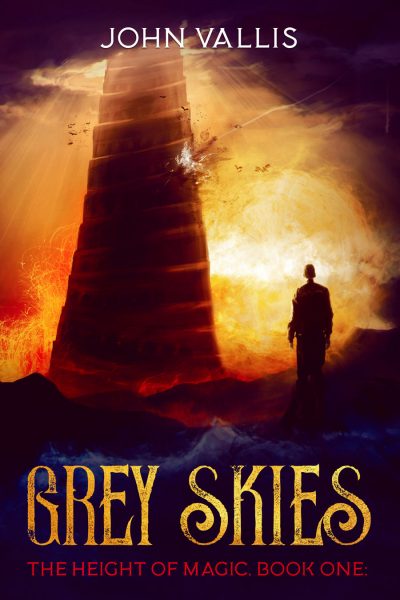 When the world is full of magic, he who controls the magic controls the world. But what happens when the world wants it back? Abandoned, sorted, and assigned to the Grey Tower; Pitt knows next to nothing when it comes to spellweaving and whilst The Company is around; he never will. Downtrodden and destined to waste his life on the work floor, he discovers something which will shake the very foundations of his post-war society – a rebellion.

‘Grey Skies’ is the first part of ‘The Height of Magic’ series. Set in an alternate reality where magic exists alongside science, readers can explore a dystopian future through the eyes of Pitt, a 14-year-old from ‘The Concrete Orphanage’.

Fast-paced and action-led, open your eyes to a universe of magic.

What Inspired You to Write Your Book?
I was inspired by my love of high/dark fantasy. On the surface, the realities in these genres can be quite appealing, but as you peek behind the veil of magic and illusion, you see deep mysterious truths. I also really wanted to write in a style that was fast-paced and moved through the action at a rapid speed. Every chapter is an event – you should always feel like something is happening, like a movie!

Book Sample
This was it, he thought, something other than magical slop. However, his hopes were soon dashed when Nib was served, from the cook’s finger; the familiar, same-old, mystic porridge. He held out his tray, watched his lunch drip into place and followed Nib to a table.
Without a thought, Pitt started eating, but he stopped when he saw Nib staring at him with a look of disbelief. He put down his fork and Nib put her half-full bottle of magic on the table.
“I’ve never seen anyone eat that muck,” she said, dipping her finger into the flask, “do you like it?”
“No, not really, but there wasn’t exactly a menu,” Pitt said. “I can see everyone else has something different, but I thought because we are younger…”
“Age has nothing to do with it, Pitt. You have access to magic now – you don’t need to eat that rubbish ever again,” Nib dipped her fingers into the flask and clicked them. Her meal of porridge wobbled and warped until it was no longer a pool of grey but a large steaming slice of pizza. She picked it up and started eating.
Pitt put his own magic flask on the table. He had never actually done magic before. He had learnt about it of course, but he clearly didn’t know much because he still ended up in Grey. He nervously popped the flask’s cork and dipped his fingers in like Nib had done. The magic felt wet but then it was also dry and hot but then cold. It was all things at once. Nib put her pizza down and eagerly waited to see what Pitt would transform his meal into, but Pitt just sat there with the magic dripping off his fingertips.
“Not sure what to have – too much choice?” she said.
“No,” Pitt replied. A small puddle of bluish liquid started forming below his hand.
“Have you… ever done magic Pitt?” she asked.
“Never,” Pitt said. Nib let out a giggle and took another bite of pizza.
“Oh, it’s dead easy, I was the same when I first arrived,” she said with her mouth full. “Just think of what you want to eat, like a wish. It’s small magic, it doesn’t need a fancy spell or anything. Just make sure you don’t use too much juice – rumour is people have burnt alive drinking this stuff,” she tapped her flask, “you won’t get in trouble, everyone does it here. It’s the only magic we can afford!”
Pitt looked at his gruel. What did he want? He wanted to do magic, that was a given, but lunch, with all his options, was difficult – he had never made a real choice before. Life in the orphanage had been controlled; routine and repetitive menus dulled his imagination. He closed his eyes and pictured, on his plate, a large slice of pizza just like the one Nib had. In his mind, it was covered in cheese so warm steam rose off it like smoke. He clicked his fingers and looked at his plate. In place of the porridge was a slice of pizza, the exact copy of Nib’s however, the copy was so exact it already had a few bites taken out of it.

Author Bio:
John Vallis is a young adult, fantasy writer from the South of England. Having studied music, and after pursuing a career in education, he has turned his attention to writing fast-paced stories which entertain all ages. His debut release 'Grey Skies' marks the beginning of 'The Height of Magic' series.