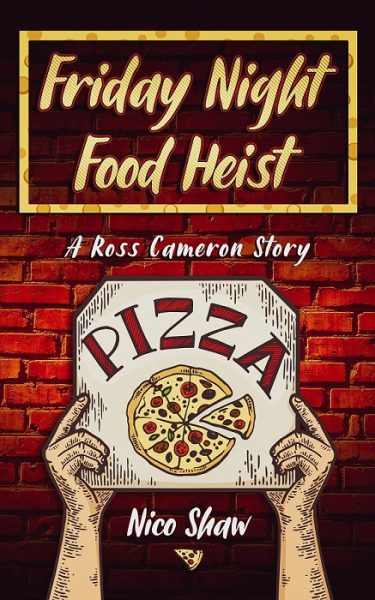 Ross Cameron is sick and tired of boring Friday nights. Of course, with friends like Mac, there’s always the chance of a more exciting development.

On this occasion, it’s the chance of free food at the expense of someone nobody likes.

The only problem – Mac’s plan requires military precision to pull off and could leave the boys facing the wrath of the most dangerous man in the neighbourhood.

What Inspired You to Write Your Book?
I was inspired by my teen adventures growing up. My friends and I got into some real scrapes back then. This was one of the ridiculous stories I had to tell.

Book Sample
"Don't be running around the streets, Ross Cameron."

If I had a pound for every time my mum said those words to me, I'd be able to afford a top-class quad bike. Sure, it's probably good advice, but not good enough to make me listen. What teenager wants an adult running their life? Certainly not me. When you're thirteen-years-old and living in Ayrshire, Scotland, there's nothing else to do but run the streets.

There are three regulars in our group; Todd Macdonald, who we call Mac for obvious reasons, Stewart Black, a boy who makes rocks look intelligent, and finally me. I'm the most sensible of the trio but it's not exactly a badge of honour, particularly when one of your friend's is a big risk-taker like Mac.

His inventiveness means we always manage to find new and ingenious ways to pass the time. Chap-door-run away is an old favourite, as is playing Kerby if we can find a road without traffic. Now and again, we shoot pool down the amusements or play five-a-side football in the indoor complex, but those hobbies cost money, and money is a luxury none of us can afford.

Perhaps, it was our lack of combined funds that led us to our usual haunt, shivering outside the off-licence at the top of Benjamin Drive, hoping the overweight shopkeeper would do what he always did – chase us away with his big red brush. Not the most exciting way to pass the time but "the chase," as we called it had become something of a Friday night ritual.

"What's taking him so long?" mumbled Mac, his mouth barely emerging from the high collar of his white jacket.

Mac was my oldest friend. He was built like a tank and much taller than his age suggested. An imposing figure without a doubt, he also had the balls to put something behind his size other than a smart mouth. One joker at school found out the hard way when he tried to get everyone calling him Big Mac. Not one to take attempts at bullying lightly, especially when it's himself who's the target, Mac beat the joker up in the maths corridor in full view of the headmaster who was doing his tour of duty at the time. He got a three-day suspension for that act of violence. A bit harsh if you ask me. Not that Mac cared one way or the other.

As he said at the time – "There will be no burger-inspired nicknames on my watch."

I chuckled over that comment while we waited in the cold, but another twenty minutes passed with no sign of the shopkeeper coming out, so Stewart…..