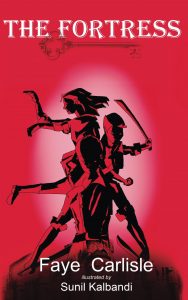 Nargassus is in trouble from the evil Sinisters. A prophecy says that a boy who is able to control the four elements of earth, fire, air and water will be able to restore peace to the land and defeat evil.

Cameron has these extra-special abilities and is sent on a mission to find the Sinisters with his two friends Anna and Sam. Anna is able to see visions of the future, and Sam has navigating powers.

The children’s search for the Sinisters leads them to a fortress where they meet Electro. Can they win against his lightning powers?

Did you love the Beast Quest series? Fans of fantasy adventure stories will love this new series aimed at 7-10 year olds.

Book Excerpt
Cameron walked into Raydon’s office and surveyed the walls covered in photographs of soldiers, swords and flags. The room smelt of vanilla mixed with chocolate and a wood fire crackled in the corner.
Raydon pointed at the chair in front of the desk. ‘Sit down, Cameron.’
‘I’ve haven’t missed any classes, sir,’ Cameron said quickly.
‘That’s not why you’re here. Zedric has been telling me about you. Do you know what a Quadria is?’
Cameron’s mind was blank but Raydon but didn’t wait for a response.
‘It is someone who is able to control the four elements: fire, water, earth and air. They also tend to have superior mind control abilities. Zedric believes you may be a Quadria. Do you think he might be right?’
Cameron recalled the time he had whipped up a storm of leaves and dust in his back garden when he’d been angry. He knew he could move the elements at will but he hadn’t realised there was a name for his abilities. ‘I think I might be a, what did you call it?’ he stammered.
‘A Quadria.’
‘Yes, I think I’m a Quadria. Does it really mean I’m better at mind control?’
When Raydon spoke, his tone was serious. ‘Yes. And we need you for an important mission. The King is in serious trouble.’