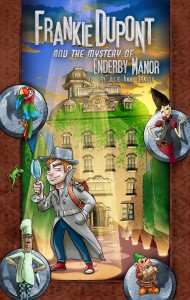 When his cousin Kat disappears from Enderby Manor, Frankie Dupont jumps on the scene, only to find bumbling Inspector Cluesome beat him to it. Cluesome thinks Kat simply wandered off. Frankie isn’t buying it.

He follows the evidence to conniving concierge, a six fingered chef, a talking parrot, and a shifty dwarf. Quite frankly, none of them are making any sense until Frankie discovers, Kat’s time is running out.

What Inspired You to Write Your Book?
It started with a name, Frankie Dupont. I decided that would be a great name of a little boy detective. I am a huge fan of mystery books, so it was natural my next book would be a mystery.

How Did You Come up With Your Characters?
The characters come to me from everywhere and anywhere. The people in my life often inspire me, as well as great movie characters that I have loved.

Book Sample
‘Creeptacular,’ he panted, as he surveyed the scene. ‘So that’s it.’ Enderby Manor stood five stories tall, with sandpaper-coloured walls and pitch-black windows staring down at him. A thick vine completely covered the top story, like some kind of weird green toupee. Its tentacles telescoped to the lower levels, reminding Frankie of the spider veins on great aunt Ethel’s legs. He shuddered at the comparison, but something else seemed familiar.
Hmm… I swear I saw a hotel just like it in geography class last week. Hmm… Where was that again? The Offel tower in Paris? He couldn’t remember, but it was something like that.
There were two cars on the gravel parking bay beside the hotel. He recognised them both. Suddenly, the volume turned up again, and the front door burst open. Inspector Cluesome lumbered out, followed by Frankie’s aunt and uncle, both looking harried.
‘Oh, Frankie, you’re here.’ Aunty Rach’s eyes were watery. She rushed over and took Frankie’s hand. ‘Have you seen Kat today? Did she call you this morning?’ Uncle Sam walked over and patted Frankie on the back. Inspector Cluesome remained silent but took out a notepad and pen, poised to document Frankie’s wisdom in the matter.
‘Nup.’ Frankie shrugged.
Cluesome’s top lip curled up in a scowl, and Frankie backed up his scooter. ‘Please, Mr. and Mrs. Dupont, we haven’t got time to waste on this boy. Clearly he knows nothing.’
Frankie’s jaw flexed. His dad had his fair share of run-ins with Inspector Cluesome. He said Cluesome always got stuck in the details and couldn’t join the dots to solve the crime.
Today, that was a big problem. Kat was missing. His dad was away on a job. Frankie couldn’t leave it to Cluesome. Today, he would have to join the dots for him.

Author Bio:
With a background in paediatric nursing, Julie Anne Grasso spent many years literally wrapping children in cotton wool. Every day she witnessed great courage and resilience from the tiny people she cared for, which inspired her to write stories to encourage and entertain them.
She lives in Melbourne, Australia with her husband Danny and their little girl, Giselle