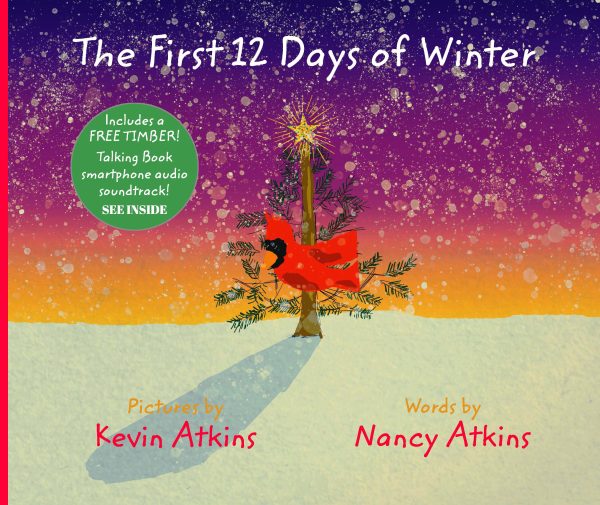 Create new holiday memories sipping hot chocolate by the fire as you watch the wonder appear on a child’s face as the British narrator (accompanied by sounds of the forest) tells the story of animals gathering ‘round a big fir tree to celebrate the return of the sun’s light.

The Winter Solstice is a time for celebrating the return of the sun’s light and sharing in the joy for the coming year. Inspired by the lyrics of The 12 Days of Christmas, this book is a fresh twist told with a playful innocence and beautifully illustrated pictures that capture the magic of each animal.

“On the first day of winter the Good Earth gives the sun a cardinal in a fir tree.”

That cardinal’s name is Carl, who begins the tale with a letter he writes to the reader, along with an invitation he hangs on a tree branch to welcome the woodland animals to the upcoming 12-day Winter Solstice Party.

In the surprise ending, the sun rises a bit earlier on the last day of the party (January 1st) and reaches far, far into the future with its many rays to bring back a dozen very special presents for the Earth in return—”12 months of days awaiting”.

A simple tale celebrating the Winter Solstice, this book is a delightful read aloud that young children will enjoy hearing again and again as they look for and count the animals gathering around the big fir tree.

The Story Springs to Life with the Included Audio Soundtrack
A TIMBER! Talking Book audio soundtrack (accessed by a QR code in the ebook and paperback) creates an immersive experience with a lively reading by a British narrator accompanied by the sounds of a cracking fire, wintry wind, flapping bird wings, hooting owls and more.

A festive “Ding!” tells the child when to turn the page to sync the words with the pictures to bring the book to life in their imagination. An important first step to becoming an independent reader, this soundtrack lets the child listen to the story over and over and over again.