You are here: Home / Featured Books / FEATURED BOOK: Billy Twigg and the Storm of Shadows by Ninian Carter 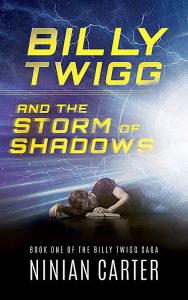 A ghastly veil of darkness is seeping slowly south from the Arctic Circle, choking the life out of the world beneath. It brings with it Typhon, a deranged abomination, laying waste to any civilisation he finds. Thousands of people are dead. If he goes unstopped, millions more will follow.
High school teen Billy Twigg, is moments away from a death more horrific than anyone could possibly imagine. He has no recollection of how he’s come to be lying broken and exhausted in the demolished remains of a famous British landmark until a fraction of a second before he is to be killed. Then he remembers everything in a deluge of nightmarish memories that are too crazy to believe, yet too shattering to ignore. Could this unassuming youth really be Earth’s only hope?
Prepare to be enthralled by a genre-blurring page-turner that will leave you breathless with anticipation and begging to resolve the next cliffhanger!