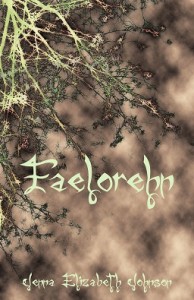 About the Book:
Meghan Elam has been strange her entire life: her eyes have this odd habit of changing color and she sees and hears things no one else does. When the visions and voices in her head start to get worse, she is convinced that her parents will want to drag her off to another psychiatrist. That is, until the mysterious Cade MacRoich shows up out of nowhere with an explanation of his own.

Cade brings her news of another realm where goblins and gnomes are the norm, a place where whispering spirits exist in the very earth, and a world where Meghan just might find the answers she has always sought.

Book Excerpt
I looked back up at the tall stranger, and feeling one of us needed to say something, I took a breath and said, “Thank you for helping me, and I am very grateful, but who exactly are you?”
He smiled, forcing the corners of his eyes to crinkle. I had to look away. Why couldn’t the boys at school be this attractive? It might make their taunts more bearable.
“You were right in guessing who I was earlier,” he said, standing up once again.
I had to crane my neck to keep an eye on his face. Even though he had the charm of a well-versed movie star, there was no way I was going to trust him. To wake up from a dream and find myself in the middle of the forest, surrounded by the living corpses of dogs, then to have him appear out of nowhere and chase them off with superhuman speed? Yeah, that was normal. Right.
He took a deep breath then ran both hands through his thick hair. I watched him carefully, not sure what his next move would be.
“Meghan, I’m afraid we’ve met under unsavory circumstances.”
He glanced down at me with those dark eyes. “Our first meeting wasn’t supposed to go this way. Those hounds,” he paused and grimaced, “let’s just say it was my job to take care of them earlier, and they slipped past me.”
I blinked, feeling myself return to my previous stupor. What was he talking about? He knew about those horrible dogs? It was his job to take care of them? What did that mean? And most importantly, how did he know my name?
I felt ill, as if I were going to throw up. I tried to stand, letting the trench coat slip off of me. All of a sudden it felt like a net meant to trap me like a bird.
“Meghan,” he said, reaching out.
But I cringed away from him, and offered him his coat with a shaky hand.
“Thank you again, but I really should get back home.”
“Not on your own Meghan, not with those hounds still lurking around these trees somewhere.”
His voice had deepened and that only made my stomach churn more.
“Please,” I whispered, feeling the first prickle of tears at the corners of my eyes, “please, I just want to get home.”
Suddenly he stiffened and his gaze intensified. “You are afraid of me.”
It was a statement, not a question. I knew I was doomed then. Wasn’t it true that if a victim revealed to her attacker just how terrified she was, then she had already lost the game? Sure, he had chased off those dogs, but maybe only to keep me whole so he could take me off to some bomb shelter somewhere to torture me slowly. I shivered both from the return of the autumn cold and from the knowledge that I was completely at his mercy at this point.
The man merely sighed deeply and said, “I fouled this up completely, but I’ll make it up to you somehow. Right now, however, I think it is best if you forget most of this.”
He held up his right arm, palm out, as if he was planning to hit me with some kung fu move.
“What are you doing?” The panic in my voice matched the racing of my heart.
“Tomorrow, this will seem like a dream, but in a week’s time I will send Fergus to you. Follow him, and I will introduce myself properly, at a more reasonable time of day. Then I’ll explain everything.”
I stared at his hand as he moved closer, wondering if I should try and fight him off if he reached for me. My mind seemed to grow fuzzy, my vision blurred.
Just before I passed out, I managed a barely audible, “Who are you?”
“You can call me Cade, but you won’t remember this, so it doesn’t matter.”
And then I was swallowed by darkness.