You are here: Home / Teen - Young Adult / Eyelids of the Morning by Heidi Peltier 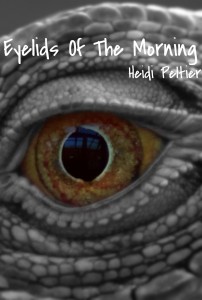 Ethan is a sixteen-year-old boy who, with his twelve-year-old brother Rory, reluctantly leaves his boarding school for the summer to be dragged to the other side of the world by their reclusive and eccentric uncle. When their uncle finally explains that he is hunting for a true, living dinosaur in the heart of the Congo River basin, Ethan immediately pegs him for a lunatic.
However, using documented eyewitness accounts, a vivid description of dinosaurs from the Bible, and, his most powerful weapon, news that Ethan and Rory’s late mother believed that dinosaurs exist too, their uncle has them convinced. They journey to the Congo and meet Shari, a missionary nurse, and her adopted daughter Maggie whose passion for the plight of the Congolese people leaves Ethan instantly smitten. Their dinosaur hunt leaves Ethan, Maggie and Rory separated from their group, facing danger at every turn, and racing against the clock to get medical help for a serious injury. In the end, they make the discovery and sacrifice of a life time, the emotional gap between the boys and their uncle is finally bridged, and Ethan learns that home truly is where the
heart is.

What Inspired You to Write Your Book?
As unbelievable as it may sound, this story was inspired by my steam mop. It was old and not working very well and had started making a lot of strange noises. While I was cleaning house one day, listening to it hiss and spit, I began to imagine that the noise I was hearing could be the noise of a dragon about to breathe fire. Within minutes, an entire story formed in my head!

The next morning, the atmosphere was tense, to say the least. Everyone checked their gear, making sure we had everything we needed in our packs, in the event we got separated. We didn’t want it to happen, but we knew Shari wanted to go back home, something we had no intention of doing. Separation was inevitable, it seemed. Henri and Louis understood what was going on and did not want to get caught in the center of the storm brewing between Shari and Uncle Paul. They pulled the guides away from the camp, toward the trees to distance themselves from whatever was coming. Rory, already wearing his pack, walked along the river bank pretending he was looking for something. Maggie and I stood several feet apart but acted like we were following Rory as we slung our packs onto our backs. Shari pulled Uncle Paul away from the camp toward the forest to let him have it. We all turned away trying to escape her wrath. It wasn’t long before she was yelling.
“We will not go any further. This has become too dangerous, and we need to turn back now,” Shari demanded.
“You are more than welcome to go back, but the boys and I are going on. We’re too close to quit now,” Uncle Paul answered in a calm tone.
“What is this about, Paul?” Shari yelled. “Why are you doing this? You can’t bring Faith back.”
Uncle Paul’s face dropped, and the silence was deafening. He turned to walk away from her when suddenly, we heard the boiling rumble again. I turned quickly toward the sound, and my heart dropped. In that split second, I saw the end of my world, as if everything I had left that was worthwhile was about to be taken away from me. There, on the opposite bank of the river, I could see a hazy outline of a giant creature and a line of fire headed straight toward……

About the Author:
I am what they call a “jack of all trades but a master of none.” I write, draw, paint, cook, bake, photograph, video edit, and craft. My most important job though is being a wife to my wonderful husband of thirteen years, Chris, and being a mom to our two precious boys, Ethan and Rory. Between driving my “should-have-been-a-yellow-school-bus” minivan to take kids to school, pick them up, take them to various practices, and watching soccer and baseball games, taking zumba classes, rehearsing with my church handbell choir, and doing my own recreational reading, I don’t have a lot of time to write. But when I do, I enjoy it, and you can be sure I give it all I’ve got. I hope to continue it and to have an audience ready for more.