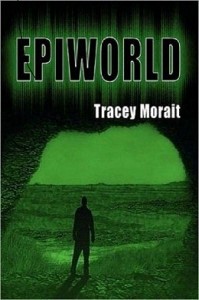 Britain 2099. All human diseases have been eradicated by genetic cleansing, but there are still people who are ‘unclean’ and locked away in institutions. Travis is one of them, until one day Dr Alexander helps him to escape to a world where nothing makes sense. Travis has powerful seizures which take him and his new friend Demi on a quest through time to seek and destroy Chase, the man he hates. Along the way he has to deal with shocks, surprises, traumas, and death, until at last he ends up on a beach, where his fate will finally be decided.

Author Bio:
Tracey Morait was born in Liverpool, England, in 1964, where she lived up until 1990 when she moved to Bristol in order to work as a librarian. There she met Keith Mitchell, whom she married in 1993.

Tracey writes and self-publishes books for children and young adults between the ages of nine and sixteen and Keith designs the book covers. K&T Mitchell is their own small press.

What Inspired You to Write Your Book?
I have epilepsy, and when I was first diagnosed I had tonic clonic (grand mal) seizures where I would black out and lose time. I have used that experience to tell a time travel, futuristic story about a boy whose seizures are so powerful they take him through time.