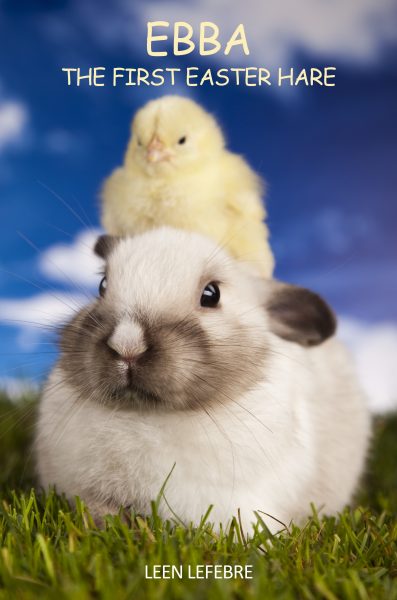 Ebba, a hare princess, wants to follow in the footsteps of her brave father. She also goes on a journey to free herself from the strict authority of uncle Stern, the evil Hare King. As a reader you also gradually discover the roots of the very first Easter hare ever. A thrilling Easter tale to share with the whole family!

What Inspired You to Write Your Book?
The spring season and the origin of the Easter Hare inspired me to write this story.

A very long time ago, in a dark field not that far away from here, there once lived a hare, who answered to the name “Stern”. Stern was not any ordinary hare; he was the king of all hares.
With an iron fist, King Stern ruled over the empire where it had been dark since time immemorial. Anyone, who did not listen to his orders, had to bear the consequences. Even those with blood ties to the king were not spared. His will was the law and it applied to all.
The Hare King had his own narrow ideas about everything. Even though there was no single subject in his entire empire who stood behind his decisions, they all did as he commanded.
For him, the rules were as clear as the full moon. Yes, within his territory in the dark field, you were protected and had a full belly at all times, yet no; food and lodging did not come for free. You would have to work for it, suffer hard, day and night, the whole winter.
But Stern’s empire was not a prison. One could come and go if he or she wanted. If you chose to leave it, nobody would stop you. Yet, one thing was sure: if you left, it was forever. You couldn’t return.
King Stern’s subjects soon realized that without help from within the field, they wouldn’t have much chance of survival on the distant frontier. And that thought kept them quiet.
One, however, decided to tempt fate. “Atta” was his given name. He was the very youngest of the king’s five brothers, but surely not the most docile hare of the empire.
Together with his love Hulde, he wanted to look for another, for a better, place far away from his brother Stern’s strict authority and dark territory. Before she gave birth to their first child, the fearless Prince wanted to find his own field, bathing in light.
“You apostate!” King Stern shouted.
Atta humbly bowed his head but then swiftly gathered courage. With his nose up in the air, he barked, “Even though I am your little brother, I, like any hare, am entitled to hold my own territory for my wife and child.”
Stern’s soul was on fire. “You dare to call yourself a brother?” He raged and hit his foot, which was black as soot, against the ground.
The ground under his feet began to shake dangerously. Atta was still standing face to face with his evil brother.
“As a true prince you above all should set an example, damn it!” Stern bellowed. His sharp voice cut to the bone.
Prince Atta felt extremely annoyed and opened his mouth to say something, as he wanted to stand up for himself. The sharp nails of his clenched fist painfully pierced his snow-white fur. I also have duties toward my family! he thought to himself but kept quiet. A deep and long sigh left his lips, before he decided to wisely press them back together.
He shook his head. Why on earth would I make more trouble?
Courtly calm, the Prince of Hares stared straight ahead. A battle of words was of no use. His brother was the king of this field and he would always have the last word. So it allowed him two choices: He needed to learn to live with it or had to leave.
The longer Atta thought about it, the firmer his decision became. He, his love, and their future child needed to go far, far away from here. Only then could they lead a peaceful life.
The king grumbled something incomprehensible, while his right eye shone right through Atta’s thick winter coat. The wild, swirling blood pulsed strongly in his neck. Nonetheless, he didn’t move even one leg. The calmness rippled slowly through his veins. I know what I am entitled to, and I, above all hares, won’t return before I have found what I’m looking for, he decided with certainty.
Atta’s eyelid trembled with tension, but his mind had never been as clear as it was at that moment. I am up for the journey! He turned away from his brother. He would not look back once while he hurried off the king’s field.

Every single day, Hulde hopped to the field’s frontier from where Atta had fled. Oh, she loved that man, who would soon rescue her and their future child from this dark, dead area, so much.
Atta was brave and she was proud of him. In a little while, they would move to their own field; their own little empire. It would be a luminous spot, where no one told their household what to do and how to behave. It was an abandoned but peaceful area, where they would live as outlaws. The thought of that created blissful feelings within her.
The future of them and their baby wobbled more than ever but it did not frighten her. In the land of dreams, Hulde collected food as a real runner and Atta protected them as a true hunter.
Every day her belly grew more but this hare never thought once of staying safely at home. In fact, you could ask her to do anything, but every single morning she first ran off to the frontier line, where she hopefully stood on the lookout for her lover.
The tempo of the pregnant hare heading for that line where the kingdom ceased to exist, became slower. First, she had run as fast as her long, strong legs could bring her. After one week, that running had turned into hopping and now it looked a lot like hobbling.
As the wheel of time rolled by, Hulde gradually lost all hope of a new, better life. When her bulging belly suddenly started to move, however, the tide turned forever. No; nothing and no one on Earth could ever thwart the happiness of this future mum. The new baby prince or princess would arrive very soon!
Wistfully, Hulde thought of her beloved man, who any time now would become a real dad. When she had first met her white prince, they had had such dreams of having their own field. In that magical place, all hares lived in peace without unreasonable rules.
Atta loved to actively reminisce about that special area, where he himself was brought up as a child. He hoped to find it, even though he had no idea where to start looking.
The current kingdom and that special field in his memories were as different as day to night. As black and dark as it was here, it had been rare white and full of light over there, he remembered well. So, wherever that birthplace was, they knew it wouldn’t be near.
Prince Atta’s old ideas were at first rather vague, but soon grew into something more specific. Suddenly, his early wish seemed real, caught fire, and opened a path to a promising future.
Hulde often liked to daydream and muse about when their lives would cross, and they became one again. She lay in half a meter of high green grass with countless white-yellow flowers, hidden from any threat above. Hungry she bit off a leaf of clover. As a foodie, she tastefully nibbled it from leaf to root.
“Mmm!” Hulde pushed her body up and with a carefree attitude lifted her head above the ground. As far as she could see, a flower meadow spread out. Her body, now shaped something like a cone, bathed in a bright light that also warmed it. Enjoying the moment, she blinked against the sunbeams.
With great difficulty, Hulde managed to distinguish the blue sky that domed the luminous field that was their new empire.
She closed her eyes firmly to the frontier and curiously raised her long ears. Her lips curled in satisfaction. The sky was crowded with innocent birdsong and soft clucking.
Hulde’s nose twitched more eagerly than ever. She bit her lower lip full of disbelief. This new life smelled surprisingly sweet.
Suddenly panic-struck, all the air fled from Hulde’s lungs. “What is happening?” she shouted.
Atta’s one hand dragged her resisting body, his other hand tried to suppress her shout. He quickly pulled her along, into a pit under the ground.
Hulde was gasping in a way that made her feel her lungs could jump out at any time. She felt so shocked. For Mother Nature’s sake, why would he do such thing? When she caught Atta’s worried look, the stress levels in her body went sky-high. Danger! she understood. But, what kind of danger lurks outside, then?
Because her lover still held his hand over her mouth, she tried to ask it with her face. Yet Atta had only eyes for the earthen ceiling.
In an unguarded moment when Hulde stuck her head under the access hole of the pit, two immense wings skimmed over her.
Hulde’s rust-colored coat shook like a waving blade of grass. The fear of an early end directly took over. A bird of prey, a hunter, over here in our paradise? Overwhelmed with emotions, she collapsed.