You are here: Home / Children's Books / Do I Need a Boyfriend by Jessica Arnold @JLArnoldBooks 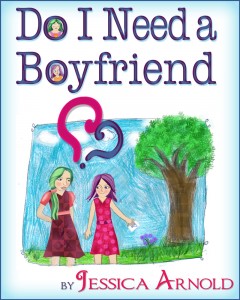 When she gets back from spring break, Monica notices that her friendship with April has changed ever since she got a boyfriend. The time she spends with Monica isn’t as fun as it used to be. April is stressed out about her boyfriend and other times she’s happy. She talks of nothing else even though the two friends are usually planning activities for April’s birthday.

Monica tells her friend she thinks that she is too young to have a boyfriend because they have some growing up to do! She talks to her mother, and feels at peace with her decision not to date, but the next day at school Monica has to deal with the pressures of standing up for what she feels is right. She is frustrated that her friendship with April is going downhill, but she doesn’t know how to get her to realize it.

Monica thinks that having a boyfriend sounds like a roller coaster! Is there anyone that can help? Is she the only one that doesn’t want to have a boyfriend?

Written and illustrated by thirteen-year-old Jessica Arnold, “Do I Need a Boyfriend” addresses the topic of dating from a young girl’s perspective. Discusses the real pressures that even 11-13 year old girls face to fit in when it comes to boys.

Quote from the book:
“Instead of talking about her birthday party plans, she just kept repeating herself as if her world depended on him for happiness.”

About the Author:
Jessica Arnold writes books for children. Her first book, “I am Good at Lots of Things” was started when she was just seven and completed when she was twelve out of a need to write something that made kids feel good about themselves.