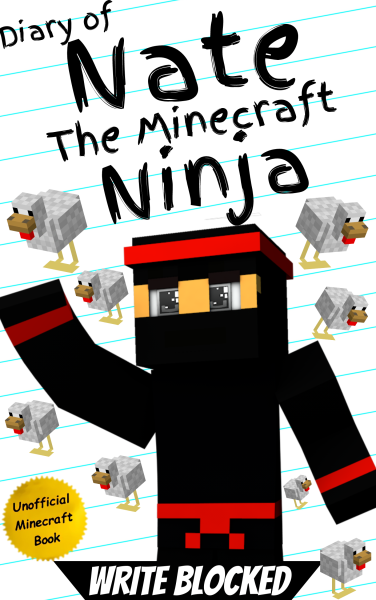 Summer vacations are when kids go to theme parks or sunny beaches. For Nate Noonan, summer vacation was when he was recruited into a secret Ninja Order called The Ender Ninjas. With school starting up again, Nate must balance his duties as a ninja with his responsibilities as a student. But things get complicated when his best friend Katie adopts a chicken and he receives his first mission to stop a group of pillagers!

Perfect for reluctant readers and fans of Minecraft! Kids love Write Blocked’s series and can’t get enough of his books. If your kid is struggling to get into reading, these family friendly books have been converting reluctant readers into voracious readers. These books are filled with tons of Minecraft references, hilarious jokes, and fast-paced action! These books are prefect for kids age 6 and above.

Want your kids to take a break from playing video games and watching YouTube, this is the book for you! These are books kids put down video games to read!

What Inspired You to Write Your Book?
I was inspired to write this book by the Saturday Morning Cartoons I used to watch as a kid. These are fast paced episodic books with tons of humor, action and heart. I want kids to fall in love with these characters and want to "tune" in to their wacky adventures!

Book Sample
If anyone had told me that I would become part of a secret order of ninjas, I would have laughed right in their face. Me? A ninja? That’s hilarious—really. I mean, all you had to do was see me at school to know how ridiculous that idea was.

Forget being a ninja, I couldn’t even play dodgeblock without being the first one to be eliminated.
Plus, ninjas don’t just exist in places like Central City. They have to exist in places far more epic than here. Cities like Blockyo or Craftsaka. Not in little old Central City.

It all happened at the beginning of summer vacation. My summer was supposed to be as boring as ever. Little did I know that it would change everything. That’s when I met Sensei Setsuo. Well, technically he found me.
I was just casually enjoying a nice day in Central City. A new deluxe cookie store had opened up down by the park. Trying one of their cookies seemed like it might be the closest thing to excitement I’d get this summer. Unfortunately, it seemed like every kid in the city had the same idea.

The line went on and on and on…you get the idea. But I was determined to try this cookie. I heard it was crafted with the freshest wheat and cocoa beans in the city!

As I stepped into the line, I heard a scream.

A black and white cat went racing across the path towards the park, an old lady trailing behind it—very far behind it.

I looked at the line in front of me, and then the line which was already growing behind me.

It was none of my business that the lady’s cat got loose. She should've taken better care of it. Or at least, that’s what I kept trying to tell myself.

Without really thinking about it, my feet moved out of the line and started racing after the cat. I passed the old lady fairly quickly, but it felt like the cat kept getting faster as I started getting closer.

I dove to catch it a second too late. Before my arms could swoop around it, the cat jumped up into a nearby tree.

After pushing myself back to my feet, I looked up at the tree. There were vines draping down from it that seemed pretty climbable. I quickly grabbed onto the vines and climbed up.

The cat seemed shocked as it stared at me, like it did not believe I would climb the tree to grab it. He thankfully did not try to jump away or put up a fight as I grabbed him.

Luckily, he was a tamed cat—just apparently with a stray cat spirit inside that longed to be free, if only for a moment.

Climbing back down from the tree was a little more intimidating than I had expected. I hadn’t taken the time to think about how I’d need to hold the cat with one arm. This meant I’d only have one arm to climb with.

My plan definitely was not well thought through. I was just running on instincts. Yet I managed to maneuver my way to the ground by using my free arm to hold onto the vines and my feet to bounce myself down.
I must say that I did look and feel pretty cool in that moment.
Almost like a ninja.

The woman had finally made her way to the tree, slightly out of breath but very grateful to have her cat back. Little did I know that Sensei Setsuo was hiding behind another tree, watching the whole thing from a distance.

By the time I had made my way back to Chunky Creeper Cookies, the new cookie store, the line had almost tripled in length since I had left. I was so close to the door too!

So, I gave up and went home, deciding that I’d try again tomorrow.

As I walked through the city the next day, I felt like someone was watching me. When I heard the rumbling of leaves behind me, I paused to look around, somehow missing the fact that I had been standing directly on top of a trapdoor.

I swear that trapdoor had not been there the day before—but that’s beside the point.

Someone must have been following me and activated the door with redstone, because before I knew it, I was falling down below the ground. There at the bottom of the fall was a giant training dojo.

Standing directly in front of me, arms folded across his chest was Sensei Setsuo.

At first I was creeped out, but I decided to hear the sensei out.

He told me everything about the ancient secret order of The Ender Ninjas. To say I was stunned would be a bit of an understatement. I was downright speechless.

When he told me he wanted to choose me as his apprentice, I was even more stunned.

This guy, a legit ninja sensei, wanted to make me a ninja!

At first, I refused. I declined. I said no way, Jose. Not in a million years. Never.

But then when he handed me a cool black training garb, a sick red bandana, and a quiver of throwing arrows—I was all in.

I trained with Sensei Setsuo day and night during the summer. Working on my aim by throwing arrows. Working on my fighting stance. Running laps to build up endurance.

It was tough, but the excitement of it all fueled me through the exhaustion. I never imagined I would spend summer vacation doing the hardest and most grueling work of my life, but that’s exactly how it went. Sure, there were times I wanted to give up, but with pure willpower I pulled through those tough times.

Whenever it was time to train, a parrot seemed to find me and repeat Sensei’s message to me in his own voice. That’s how the Ender Ninjas communicate—with tamed parrots. Isn’t that just the coolest?

After a week he presented me with my wooden sword—making me a true member of the Ender Ninjas.
Apparently, the wooden sword is the beginner rank of the ninjas, then you advance to a stone sword, then iron and so on.

When I took the Ninja Oath, I had to promise to never tell anyone. They were called a secret order of ninjas for a reason. Plus, we all know what happens when a hero’s secret identity is known.

Bad things happen to them and the people they care about. I took the oath and promised to keep my ninja skills a secret from everyone.

Since I’m just a beginner, I’m one of the lowest ranking ninjas in the order—known as the Wooden Rank. I’m sure that after completing a couple missions though that I’ll be at Iron Rank in no time!

Then I’ll keep progressing until I get to be a Netherite—the highest rank any Ender Ninja can get.

For today though, I’m just a Central City middle schooler on his first day back to school from summer break.
Just plain ol’ Nate Noonan.

Author Bio:
Write Blocked is the Amazon bestselling author behind popular middle grade series such as the superhero The Mob Hunter series and the LitRPG Stuck Inside Minecraft series. Writing since 2015, Write Blocked knows exactly how to get kids to turn off their screens and start reading. His fun books based on Minecraft are prefect for reluctant readers!