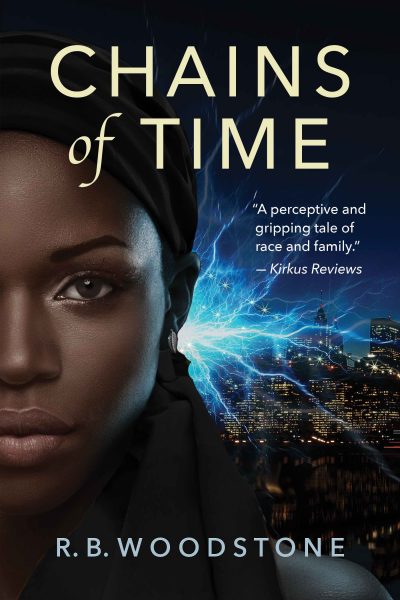 “A perceptive and gripping tale of race and family.”
— Kirkus Reviews

“I know what’s going to happen,” says Amara as she wakes on the morning of her wedding to discover that she has been blessed — or cursed — with the power of prophecy. In her visions, she sees the slaver Van Owen, who will soon arrive on Africa’s shores. Her father will challenge the invaders, wielding magic against rifles and whips, and setting in motion Amara’s bid for freedom — a quest that will extend for five generations. But no wait is too long, for Amara can see far into the future, and Van Owen is immortal.

Chains of Time tells two interweaving stories — Amara’s nineteenth century slave chronicle and the tale of her modern-day descendants in Harlem, all of them fighting to find their voices, their redemption, and their freedom.

What Inspired You to Write Your Book?
Very few white novelists dare to address the topic of slavery. I am drawn to it, for it is one of America's original sins. We must examine it, write about it, talk about it, and address it, or we will never move beyond it. I wrote this novel as a fantasy to show that racism and the repercussions of slavery are seemingly immortal forces that can be battled and overcome only by fantastical power.

Book Sample
In the morning, the guards will come and cut the rope. They’ll take the body behind the barn and burn it, the stench of scorched flesh shrouding even the pervasive redolence of the tobacco. For tonight, though, I’ll remain here with my friend, watching him sway in the autumn wind. I’ll stay with him all night, forcing myself to learn what has somehow eluded me until now: that no African born in America can ever truly know freedom.

Author Bio:
R.B. Woodstone is a writer, educator, and musician living in Brooklyn, New York, with his wife, their child, and two nutty animals.

R.B. is fascinated by stories that blend fantasy and history. He is white and respects that some people are uncomfortable with white authors writing Black characters, but he believes that white Americans must explore and address the ramifications of slavery, one of America’s original sins. He is drawn to write these stories, some of which are seen best through the eyes of Black characters. To that end, R.B. labors to create Black protagonists who exist for their own sake and not as machinery to facilitate the emergence of white protagonists.

Half of the proceeds from this novel will be donated to Equal Justice Initiative.

R.B. is currently working on several novels including Time in Chains, the first sequel to Chains of Time. He is also writing a rock musical based on Dante’s Inferno.