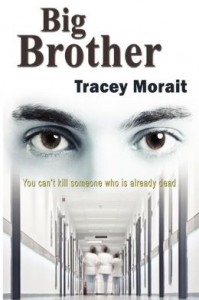 When his dad leaves for a job in New York Ash is left to cope with his drug-addicted, alcoholic mother Rhonda, who decides to move away from the life she hates in Bristol to her home town of Liverpool, taking Ash away from his school, his mates and his gran. Not only does Ash have problems at home with a harassing, demanding mother, he becomes the easy target of a gang of bullies at his new school, the Jessop crew, because he talks with a different accent and wears a hearing aid. Then one day Ash meets the mysterious Big Brother, who wants to help Ash seek revenge on the Jessops, but it seems Big Brother has an agenda of his own. Just why is he so keen to help Ash destroy his enemies, and where did he come from? The pair strike up a partnership Ash is very soon desperate to break; the problem is Big Brother refuses to let him go.

Author Bio:
Tracey Morait was born in Liverpool, England, in 1964, where she lived up until 1990 when she moved to Bristol in order to work as a librarian. There she met Keith Mitchell, whom she married in 1993.

Tracey writes and self-publishes books for children and young adults between the ages of nine and sixteen and Keith designs the book covers. K&T Mitchell is their own small press.

What Inspired You to Write Your Book?
I don’t like gangs or thugs who get away with light sentences or who evade the law, so I decided to write about a vigilante character who wants to help one victim resolve his problems with a gang, giving the story a scifi twist with a bit of horror thrown in.