You are here: Home / Free and Bargain Books / Kindle Unlimited eBooks / Beyond The Mirror: Seechers by M.K Williams & Natalie Kavanagh 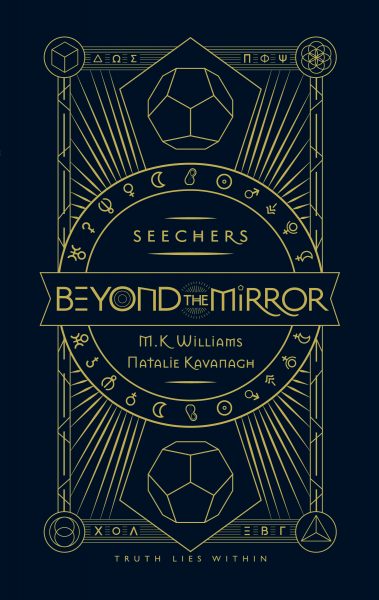 Beneath the surface of a top London university, an ancient society known as The Seechers, operate. They protect the world’s biggest secret. A hidden gateway to the subconscious world.

New philosophy student, Aris Fletcher, stumbles into the unimaginable world of The Seechers; as his bizarre dreams, present disturbing glimpses into the future.

What Inspired You to Write Your Book?
The world of the Seechers has been inspired by my life-long fascination with dreams. As a teenager, I used to talk very intensely with my friends about dreams. We tried to control our dreams, have shared dreams, we researched the meaning of dreams and we even had our own dreamers club. I became very interested in hypnogogia, which is a transitional state between being asleep and being awake. Many famous writers, artists and inventors have used this state to retrieve their extraordinary ideas. Thomas Edison is well known for his techniques in trying to tap his subconscious for deeper insights for his inventions. After trying, for a long time, to find my own method to tap my subconscious in this way, for an amazing idea, I began to realise, that the concept of taking something out of the subconscious and into this world, was in itself the start to an idea. That is really what Seechers is about. They are an ancient and secret group of intellects, who have essentially pulled unworldly powers, out from a dream and into the conscious world and there are bad guys who what their power, for themselves.

Book Sample
The large metal doors thrust open before Aris had even reached them. It was as though he’d willed them apart. An unnerving determination glistened in his big blue eyes. His long, mousy-blonde hair brushed off his brow as he hit the outside air. His pace was so quick he barely managed to read the sign that indicated he was now on the roof. Not slowing for an instant, Aris bolted to the edge. Peering over and taking in the long drop, he knew the only way out was to jump. The building was thirteen-stories high. The only chance of survival was to land in the river below.
Panting hard, the cold air gave form to his breath. Aris had risked everything to be in the Curative Analytical building this night. Tightly held in his hand was a small, glass column-shaped hard drive. It glowed with a beautiful blue luminescence and was of a value he could barely comprehend. Yet he knew he had to escape with it. He had to keep it safe and, eventually, destroy it.
“STOP!” a loud, harsh female voice cut through the frosty air like a sledgehammer through a block of ice. It wasn’t the shrillness of the voice that immobilized Aris, it was the familiarity. He knew exactly who was behind him. Slow and fearful, he twisted to face her. Memories of the recent dreams he’d had, of this exact moment on the roof, raced through his mind. He knew the dreams had been a glimpse into the future. That, one day, this horrible scene would unfold. He just hadn’t foreseen how quickly it would transpire. Nor had he anticipated that the silhouette of the woman, who now stood in front of him, would become someone he’d grown to love.
The outline became clearer as she stepped into the moonlight. Even in the darkness of night, Aris could still make out her piercing eyes. Maya Green stood tall, glaring towards him. Her long blonde hair wisped in the breeze.
Aris took a large gulp of air before he uttered her name. “Maya.” There was a tremble in his voice. He paused, not sure what else to say.
He tried to remember what he’d said in the dreams. “I can’t believe this is really happening,” Maya said as her voice shredded; her eyes filling with tears. She stood bold as she often did. Except, this time, held at arm’s length was a handgun, that she pointed squarely at Aris.
“The others will be here soon. There’s still time to make this right,”
Aris declared with confidence, though he lied. “Aris, please, you have to give it back. This means more to me than it does to you!” Maya requested as she outstretched her left hand. “I can’t! How many others are going to die if this carries on?! I can’t let this happen. I’m sorry, Maya.” Aris edged back. He could hear distant footsteps race up the stairs he’d not long sprinted up. He raised the glowing hard drive high in the air as the heel of his shoe touched the edge of the roof. He tentatively glanced over his shoulder and down at the river before turning his attention back to Maya.
Tears tumbled down Maya’s face as her hand shook. She shouted loud enough so those rushing up the stairs could hear. “Give me the hard drive!” Several men armed with guns hurried out of the doorway. She wiped her tears away before any of them reached her side. “I forgive you,” Aris said softly as he looked down again, mustering the courage to jump. Maya was now flanked by security guards and, joining her was Dr Rivers. A tall man, with a large jaw and pitted skin. “That hard drive’s property of Curative Analytical. You’re trespassing and stealing. I’m not sure what business you have here, or what you think you know about that drive, but if you come away from the edge now, we’ll sit down and talk about it. We won’t press any charges against you. Just come this way.” Dr Rivers urged as he stretched out his hand and took one step closer.
“No!” Aris shouted.
“What are you going to do, boy? Jump?! Don’t be a fool. You’ll never survive that fall. Is this really worth risking your life over?” Dr Rivers reasoned, with a painfully fake smile. A deep fear consumed Aris. This moment had unravelled eerily in exactly the same way he’d seen in his dreams. Except he knew the dreams always became fragmented and unclear from here on in.
“Step away from the edge. You’re putting yourself in great danger, “Dr Rivers shouted. Aris turned and prepared to leap. But before he could, the sound of a gunshot rang out. He stumbled on the spot for a moment as an immense pain blasted through him. A bullet had pierced through his back and ripped out from his abdomen. He cocked his head towards Maya and saw a plume of smoke empty from the barrel of her gun. Blood quickly saturated his clothes. Security guards galloped towards him. His mind blacked out, and he toppled headlong, plummeting to the river below.

Author Bio:
M.K Williams is the author of the contemporary fantasy saga 'The Phoenix Chronicles', and Co-Author of Seechers: Beyond the Mirror and contributor to the Seechers Series. M.K Williams lives in Devon, UK and is a full-time registered nurse. He is currently working on the sequels to 'The Phoenix Chronicles: Alone in the Light' and the development writing of Seechers, as well as working on several other writing projects.

Natalie Kavanagh created the teen fantasy drama 'Beyond the Mirror' with M.K Williams, based on her short film 'Seechers' which will launch on DUST YouTube channel (2.36M Subscribers) on 15th April 2021. To finish the book and the short film, Natalie ran a successful Kickstarter, and she wishes to thank her amazing 43 backers for helping to make her dreams come true.