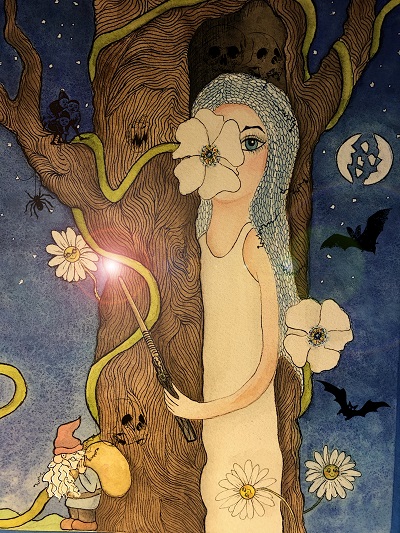 Fable Bellbrooke is a 12 year old girl living in a world that’s barfing up magic all around her, yet she has NONE! And Fable is just fine with that, thank you very much! She hates magic! Then, when an ancient wand appears to her one late summer’s eve, it turns her world upside down!
On the run from the evil shrike with her best friend, Elara, and her annoying know-it-all stepbrother, Irving, and with the help of a seven foot tall BigFeet, the trio are transported to a sanctuary called the Weird Wood and into the secure arms of its Caretaker, Doctor Rose Smoot.There, they find that the residents live up inside trees called Treenormous, towering trees that scrape the clouds.
Then, on their very first day in the Weird Wood, the trio walk in on a burglary. Fable discovers that SOMEONE has spirited Doctor Smoot’s assistant away into a painting, and then just hours later, the director of the Bureau of Magics herself is turned into a statue!
The Mad Craftmaster is on a rampage inside the Weird Wood, its residents up in arms. Determined to discover who the culprit is, and sure that he or she is hot on their trail, Fable, Elara and Irving set out to investigate, but with so many dead ends, twists and turns, will they unmask the villainous fiend in time before one of them become the next victim??

What Inspired You to Write Your Book?
What inspires me to write, period, is my love of words. I love playing with words, and I love weaving them together to paint a fun and exciting tapestry for the reader. My sister is a painter, and I would compare writing to painting, only you're using the written word instead of a paintbrush. I remember when I was eleven, purchasing my first thesaurus and fanning through it, dazzled by all the synonyms. Now, I visit it online a hundred times a day!
Fable Bellbrooke has been in the back of my mind forever, and the first incarnations of her look nothing like the end result inside Bellbrooke, Kandle & Crooke. The idea of the legacy wand came to me when I was sitting in my backyard, looking at an old dead oak tree that had been chopped down, and I was counting the rings inside its trunk, and I thought to myself, what if wands aged in much the same way, with rings counting their years? What if a wand was almost – alive?

Book Sample
Dear Reader,
It is my sad duty to inform you that the world will indeed end and, though it was the opinion of the esteemed T.S Eliot that it would go out with a whimper not a bang, I am sorry to say that there will be BANGS, and BOOMS, and even KA-booms. Stuff will drop from the sky, the Earth will shake, buildings will fall, oceans will rise, people will get squashed (lots and lots of people will get squashed!) and that's not even the worst of it. Little do you know, there have been witches and sorcerers lurking in the shadows for eons now, many of whom were just biding their time, waiting for the moment when humanity was most vulnerable to strike. And strike they shall, my friend.
Hug your mother, your father, your teddy bear, a tree, or anything that might give you comfort. Oh and – you might want to consider digging a very deep hole for you and your loved ones to hide away in, and pack toothbrushes – lots and lots of toothbrushes. You will be needing them. If you survive, that is.
If you do happen to survive the coming calamity, I pity you and suggest that you prepare yourself for the centuries of horrors to come – magic, disease, magic, hunger, magic, indentured servitude. Oh, and did I mention magic?
You won't have it, of course – magic that is. No skab in the history of the world has ever had magic. By the way, that's what you'll be called after the end – skab. Your kind will be made to forget every deed ever done, good or bad. Automobiles? You never invented those! Skabs flying in planes? Nonsense! The moon? Oh, there's much to be said about that particular lunar body and none of it is good, but fear not, there is a glimmer of hope for your kind, and that hope lies in the pure heart of a very young girl, but alas, I am babbling, and you must be getting bored, so let us get on with it.
Our story begins as most stories do – with death, despair, destruction and a little mystery, centuries after the end of the end of the world, because there is always a new beginning, even after the end.

Author Bio:
I'm old, older than my years , with a crick in my back, and I love anything fantasy. But Fable Bellbrooke, is far older than my aches and pains, since I have been working on getting her just right for years. Elara too, and Irving has always been in the back of my mind.

These days, if I'm not out on my porch with a cup of coffee in my hand, surrounded by my four cats and contemplating new and terrible ways to torture my young protagonists, then I am writing. (Generally, with a cat keeping my keyboard warm).

I love gardening, landscaping, cooking (especially in the crock pot!) – spaghetti and lasagna are a couple of my favorites, and, of course, writing and reading. When I'm not writing these days, I'm usually engrossed in my third time around reading Game of Thrones.

I am excited to say that, as of this writing, I am currently working on book two in the series, entitled – Bellbrooke, Kandle & Crooke – Death's Door, which will be a bit darker than its predecessor, but will still include all the fun, as well as all the quirky characters from book one, including the spriggan and the gnaw. However, Death's Door will introduce a whole slew of new and exciting characters and magic to drive Fable crazy during her exploits in the Weird Wood!

And, for those of you who have finished book one, you know EXACTLY who or what one of those characters will be! 🙂