You are here: Home / Free and Bargain Books / Bargain Books Under $3 / Becoming Anorak Nid (Book One) by Alix B Macey @alixbmacey 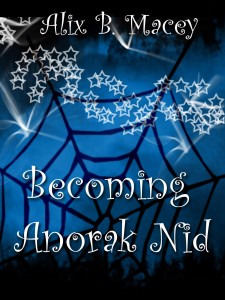 This is the first in the Becoming Anorak Nid series by Alix B Macey. Perfect for 8+ children + reluctant readers.

But hey, stop…you don’t want to read about the fact that it’s a fictional children’s story that will propel you full pelt into the sporadically funny, celestial life adventures of a persecuted, orphaned spider called Nid – with a fantastical fantasy twist and funny (not entirely ha ha) scrolls? You just want the facts – right?

I bet you don’t even care that ever since Great Aunt Wince got flushed down the plug-hole in the upstairs lavvy and was never seen again, Nid avoids water at all costs – in whatever form it takes; puddles, ice-bergs, baths, even spit – do you?

In the face of all this, for goodness sake don’t spill the beans, but Nid has a job to do – will he be able to pull it off though?

Somewhere a cat barked, a dog meowed, and Trevor the Webber persecuted.

Purposefully, with a touch of mysterious silence, lurking in the corner of Mr. Busy’s bumble sale – underneath holey socks, smelly jumpers and odd knickers, is the magical answer to all of Nid’s bonkers thinking – that could change his life forever…

Joined by his astonishing mute ant friend, Sile Ant – who for obvious reasons has no speaking part (quite odd in a book really?), Nid heads off on one of the most challenging adventures he will ever have to undertake –ever, in the whole world of England.

But just exactly where did he leave his oomph?

Why is that rascal Trevor the Webber having his ear sown back on?

What are these mysterious scrolls with funny bits of ribbon around them?

What about Cricket and his mysterious missing self?!

Why am I asking so many questions?

And hey! Why is there a light, the size of a freckle, groaning underneath the kitchen window?

You won’t find the answers here… you sausage! You have to take a look inside….

Book Price: $0.99 16th – 17th November only. Normally $2.99 Promotion tied in with Becoming Anorak Nid: A Rude Awakening (Book Two) being FREE on Kindle 16th November. Buy one, get one FREE

Book Excerpt
It was 2am when it happened. A bright light, no bigger than the size of a freckle, bobbed along on the breeze of the night. Gently swirling and dancing its way through the air. Softly swooping up and then down. And if you listened carefully you could hear it humming a little humming tune. How delicately this little light whispered through the darkness.

“Oh snotty tissues!” The light cursed as it slid down the kitchen window.

And then it was gone.

How is Writing In Your Genre Different from Others?
I have never written for any other genre so that would be hard to say. Although, I would say that it’s hard to write for children these days as everything seems to have moved on and children seem want more from you. It is definitely different reading kids books now compared to when I was a nipper…ahem…ALL those years ago!

What Advice Would You Give Aspiring Writers?
There are funny writers and serious one’s, quirky jerky’s and romantic butterfly whisperers. There is a storyteller in every one of us. Especially children. Don’t stop believing in your heart… in your truth. Get it all down on paper – preferably not “toilet” however, and share your imagination with the world. Because your imagination is unique… it’s a little you bubble floating on the breeze waiting to be popped… and heard.

NB; Having just read that back I would like to point out that I do in fact live in a house and not in the country-side.

What Inspired You to Write Your Book?
It all started with a play-on-words. Hero (Nid) is a spider which of course is an-“arachnid”…an-arachnid. Nid buys a magic coat/anorak and becomes a bit of a superhero and gets known as Anorak Nid (an-arachnid). Tee hee..can’t stop giggling..there are loads more characters in the books (one and two) with very similar stories…