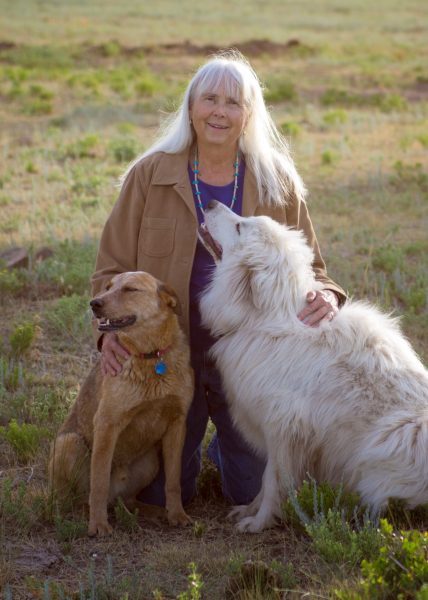 In Colorado Springs, the summer of 1898, thirteen-year-old, Ruby is bored, bored, bored. What starts out as a plan to train her donkey to pull a buggy, ends in a prickly business deal with her friend Roy, who has escaped from his miserable life in Cripple Creek.
Roy lives with his peculiar Aunt Agnes, the caretaker of a mansion where things go bump in the night. Ruby suspects Aunt Agnes is involved with two bandits who dress in black and appear and disappear without a trace.
The business is threatened, and Roy is in danger. Ruby is going to need all her courage to save her animals, Roy, and herself.

What Inspired You to Write Your Book?
I was inspired to write about a donkey named Maude after a trip down to the bottom of the Molly Kathleen Mine in Cripple Creek, Colorado. I started out to write one "donkey" book and ended up with five. This book is the fourth novel length Ruby and Maude Adventure. Now there are two donkeys and a cat, and Ruby is 13. Another adventure unfolds for these unforgettable (to me, at least) characters.

Book Sample
RUBY PRESSED THE TOE of her boot onto the trolley track, estimating the arrival time. Six minutes, she figured, from the rumble beneath her toe. She flicked her braid off the damp collar of her dress and daydreamed about hiking with Pa and her donkey, Maude, over a high mountain pass with hawks swirling above and a cool breeze tickling her neck.
The mountains were never boring. Pa taught Ruby the names of wildflowers and pointed out animal tracks and little burrows where the animals live. If they were lucky, he pointed out the animals, too. Ruby had seen mountain lions, marmots, bears, birds of all kinds, crawly things, and even a rattlesnake or two.
Pa did all her schoolin’ too. Ruby could out-multiply, out-read, and out-geography everyone in her class. She loved learning until she’d been snagged by the school principal in Cripple Creek and imprisoned by a hard wooden desk surrounded by colorless walls. At least when they’d lived in Cripple Creek, their cabin was at the edge of town, but here they lived in a small white house on North Weber Street crowded with neighbors.
Ruby gazed up at the high wispy clouds, cirrus, the fair-weather clouds. She knew all the clouds: cumulus, the ones she called story-telling clouds, and nimbostratus, dark and moody.
Lately, Ruby had been a nimbostratus.

Author Bio:
Nancy Oswald loves the west and writing about it. She’s a native Coloradan with a focus on Colorado-set historical fiction for young readers. She has also published non-fiction articles, a biography, and a humorous baseball, sibling rivalry story. Oswald’s books have won the Willa Literary Award, Spur Award, Evvy Award, CAL Award, Will Rogers Medallion, and numerous finalist recognitions. She enjoys reading and research, gardening and helping on the family ranch where she lives with her husband, cows, dogs, cats, chickens, and one nearly human donkey who makes mischief at home and on the pages of the Ruby and Maude Adventures.