You are here: Home / Children's Books / Children's - Fairy Tales, Folk Tales & Myths / Away With the Fairies by Jenny Twist 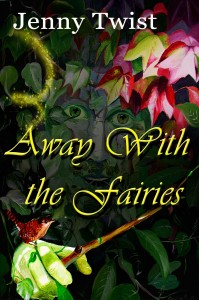 Lucy likes to stare at the wall. Her mother thinks she is suffering from petit mal but Granny McCurdle says, “ Och, she’s away wi’ the fairies again.”
Nobody takes this literally until Lucy disappears. Her sister knows where she’s gone, but who would believe her? Can she really have gone to Fairyland?

Author Bio:
Jenny Twist was born in York and brought up in the West Yorkshire mill town of Heckmondwike, the eldest grandchild of a huge extended family.
She left school at fifteen and went to work in an asbestos factory. After working in various jobs, including bacon-packer and escapologist’s assistant, she returned to full-time education and did a BA in history at Manchester and post-graduate studies at Oxford.
She stayed in Oxford working as a recruitment consultant for many years and it was there that she met and married her husband, Vic.
In 2001 they retired and moved to Southern Spain where they live with their rather eccentric dog and cat
Her first book, Take One At Bedtime, was published in April 2011 and the second, Domingo’s Angel, was published in July 2011. Her novella, Doppelganger, was published in the anthology Curious Hearts in July 2011, Uncle Vernon, was published in Spellbound, in November 2011, Jamey and the Alien and Uncle Albert’s Christmas were published in Warm Christmas Wishes in December 2011, Mantequero was published in the anthology Winter Wonders in December 2011 and Away With the Fairies, her first self-published story, in September 2012.

Her new anthology, with Tara Fox Hall, Bedtime Shadows, a collection of spooky, speculative and romance stories, was published 24th September 2012.
Her new novel, All in the Mind, about an old woman who mysteriously begins to get younger, was published 29th October 2012.

What Inspired You to Write Your Book?
When I was a child I regularly would see a sequence of pictures play out upon the wall in front of me. It was as if a film had been projected on to it. The sequence was always the same. Every time I saw it I recognised it and knew what would happen next, although afterwards I could remember hardly any of it. I just knew it was moving pictures and somewhere in there was a gnome. I called it ‘my pattern’ and I loved it. It was a secret pleasure.
I don’t think anyone else knew about this. I certainly never told anybody and my mother had very little time for me because my younger brother was very ill with epilepsy – the fully-developed form with convulsive fits and blackouts known as grand mal (great evil). It was only years later, long after I had outgrown ‘my pattern’, that I saw a programme on the subject and realised that what I had experienced was petit mal (little evil), a much milder form of the same condition.

This is what Lucy does in Away With the Fairies. She stares at the wall and looks into another world. Her parents think that she is suffering from petit mal. I don’t think she is, though. I think something completely different is happening.

I also realised that I had drawn on my knowledge of English folklore, particularly the rather obscure tale of the Green Children, who had appeared in an English village one day, hand in hand. They had green skin and would only eat beans. The boy soon died, but his sister learnt to eat a variety of food, her skin lost its green colour and she eventually learnt to speak English. She told her new family that she and her brother had walked into a cave one day and came out into a different world.

If you want to know how these two strands wove themselves into a story, you will have to read the book.