You are here: Home / Teen - Young Adult / YA - Paranormal / Aversion: Book One of The Mentalist Series by Kenechi Udogu @kenechiudogu 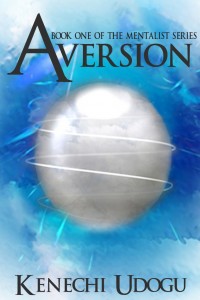 For Gemma Green’s first time, things should have been straightforward. Find your subject, hold their gaze and push a thought into their head to save them from future disaster – Aversion complete. A pretty simple process given that the subject was to have no recollection of the experience. But Russ Tanner doesn’t seem to want to forget. In fact the more she tries to avoid him, the more he pushes to get to know her. Gemma knows she has a problem but is she facing the side effects of a failed Aversion or has the school’s tennis champ really fallen for her?

What Inspired You to Write Your Book?
I’ve always been really interested in exploring parapsychological themes. For Aversion, I wondered what it would be like if I possessed a paranormal ability which could help others but still give them the freedom to mess up their lives. I knew the ability had to be something subtle in execution yet grand in impact. I also wanted the protagonist to feel like a loner, but not so much that they had no clue what they were doing. It didn’t take too long to build on this basic idea.

How Did You Come up With Your Characters?
I am a huge fan of paranormal TV shows (I’m still upset that Heroes was cancelled) so it wasn’t difficult to imagine a world where people live with supernatural powers. I tried to make the lives of Averters as mundane as possible so the story could be more believable. Apart from carrying out their Averter duties, nothing truly extraordinary happens to them. That way, I hope readers can identify with the other real life problems the characters encounter.

Author Bio:
Kenechi lives in London, UK and writes contemporary, fantasy/paranormal fiction. She has released 7 young adult books and contributed a short story to a children’s charity anthology. She also hates the cold and hopes to one day figure out how to hibernate in winter.