You are here: Home / Children's Books / Children's - Fantasy / Avalina Jones and the Eye of the Storm by Lori Adams 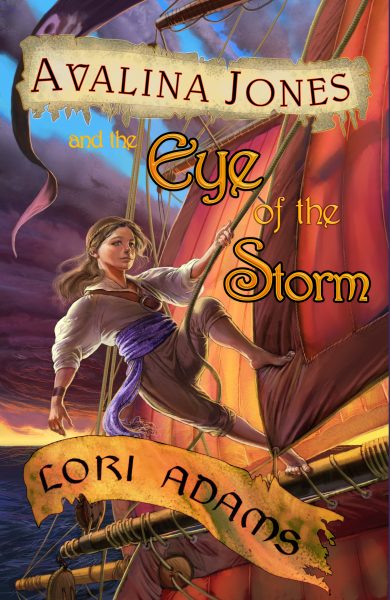 AVALINA JONES AND THE EYE OF THE STORM (#1), middle-grade fantasy adventure series for 9+

4/5 STARS
“Avalina Jones and the Eye of the Storm is an action-packed fantasy. . . This novel is packed with creativity. Lori Adams has outdone herself in describing the magical ship and all of its components. . . I really enjoyed the story of Avalina Jones and her pirate adventure . . . any Hogwarts fans might find themselves equally enthralled by Avalina and her time aboard the Aquatiery.”~SAN FRANCISCO BOOK REVIEW

“I just adored this book! Despite being well into my adult years, and this being a middle-grade book, I found I couldn’t put it down, lol. Lori Adams has an amazing knack for whimsical descriptions that just made me smile every page . . . If you are a fan of the ocean, pirates, fun adventures or mystery, then there will be something in this book for you to enjoy . . . It’s very light hearted, filled with great friendships, over-coming bullies and good-natured fun.” ~NETGALLEY REVIEWER, JENNIFER F.

5/5 STARS
“I picked this book because I love pirates. . . it was just non stop action, mystery and fun. . . I feel this story has the potential to become what HP was for the generation back then. . .Can’t wait to read the next one!”~Netgalley Reviewer, 608937

When a young girl learns she is the Last Heir of the infamous pirate Davy Jones, she is whisked away to begin life aboard an enchanted schoolship for Pirate Heirs where danger and excitement awaits.

Contemporary kids who happen to be Heirs of the most villainous and celebrated pirates in history. Superstitions, mysteries, curses, secrets, strange ocean creatures, undead pirates, and seafaring legends will thrill middle-grade readers in this rollicking, globe-trotting adventure.

Avalina Jones, the Last Heir of the infamous pirate Davy Jones, has never heard of Sea Magic, flying dinghies, Pirate Heir schoolships, phantom islands, undead pirates, or creatures called Half Ones. And she has never understood her strange connection to water. But when a beautiful woman arrives in a swirling waterspout, Avalina’s life explodes with more adventures than she can possibly imagine. She takes her rightful place aboard a giant Pirate Heir schoolship teeming with Heirs of the world’s most nefarious pirates.

Raised as a Landlubber, Avalina quickly realizes bizarre and danger are normal aboard Pirate Heir schoolships-food fights back, school supplies giggle or explode in your face. And not everyone can be trusted.

When Avalina is accused of a terrible crime, she must prove her innocence or risk being banished from the schoolship forever-and this in the middle of a crucial Treasure Hunt!

Avalina races to unlock secrets of the ship, and makes a dangerous discovery that threatens everyone aboard. With the help of her new friends Charlie, Pippa, and Bummy, Avalina draws closer to the truth, unaware that a deeper, darker fate awaits.

What Inspired You to Write Your Book?
Like so many others, I have always loved pirate stories and adventures at sea. Inspiration for the Avalina Jones series sprang from a news article I read about people living full-time on giant cruise ships. As a writer, I quickly became fascinated by the idea, my mind jumping straight to a ship full of children living at sea without parental supervision. But these children had to be special, different, and from all backgrounds.

While researching ships, it was impossible to avoid pirate ships so rather than fight the current, I went with the flow and decided my (contemporary) children were Heirs of the world's most legendary pirates. Thus was born a schoolship of diverse and clever children who criss-cross the oceans, not only looking for mysterious and very specific pirate treasures, but who try to outsmart an evil undead pirate determined to destroy their way of life.

After throwing in a bit of Sea Magic, Half One sea creatures, a curse, and phantom islands, the story set sail on its own.

Avalina Jones slowly sank to the bottom of the giant claw-footed bathtub. Her arms floated at her sides and her long dark hair drifted about her shoulders. Bubbles trickled from her open mouth while her wide blue eyes blinked and gradually closed. One minute passed. Then another and another. Five long minutes and still, Avalina Jones remained at the bottom of the giant tub.
Small bare feet padded across the bathroom’s black-and-white tiled floor and stopped at the bathtub’s edge. Macy, a young orphan of seven-years-old, clutched her long white nightgown and peered into the water. She gasped and then wailed in horror. Such a racket roused every orphan on the third floor of La Maison des Oublies—the House of the Forgotten. Within moments twenty fearful girls huddled around the tub, horrified by what they saw. And then more orphans raced up from the second floor, shrieking at the sight of Avalina Jones lying quietly at the bottom of the tub.
It was enough to bring Miss Ward, the orphanage’s owner, stomping into the bathroom in her own nightgown. An unhappy woman, Miss Ward brought her scowl with her wherever she went. Her dark hair, always pulled back from her pale face, was wound into a tight bun atop her head and captured with a small black net.
“What now?” she demanded and then stopped abruptly upon seeing the young girl in the tub. Miss Ward stared openmouthed for a moment before narrowing her eyes with suspicion. Then she leaned over, slapped the surface of the water, and yelled. “Get up!”
Avalina bolted upright, sputtering and coughing water. She blinked furiously and brushed water from her face. “Jumping junipers! What’s all the fuss?” Avalina blasted. A sea of astounded expressions surrounded her.
“Oh, Avie!” wailed Macy, wiping tears from her eyes. “We thought you were—”
“That’s enough of that!” snapped Miss Ward. “Avalina Jones can hold her breath longer than most! Big deal! Now back to your rooms! All of you!”
Without further explanation, Miss Ward herded the girls out of the bathroom and closed the door. She grabbed a towel from one of the pegs lining the long wall and threw it across the room at Avalina.
“Get out of the tub! At once!” she barked, her dark beady eyes flashing with anger.
Avalina carefully climbed out and dried herself off. She slipped into her long white nightgown and faced Miss Ward.
“You know I wasn’t holding my breath,” she said quietly. Miss Ward sniffed and raised her chin.
“Yes, I know.”

Author Bio:
Lori Adams is the author of the Avalina Jones series (MG, fantasy adventure) the Kate March Mysteries (YA, historical mystery) and the Soulkeepers Series first published by Random House (YA, paranormal fantasy). Originally from Oklahoma, she now lives in Southern California. When not writing, Lori spends her time roaming California’s wonderful beaches with her family and watching Classic Hollywood Movies.