You are here: Home / Free and Bargain Books / Kindle Unlimited eBooks / Ariella and the Curse of Dawnhaven by Owen Crane 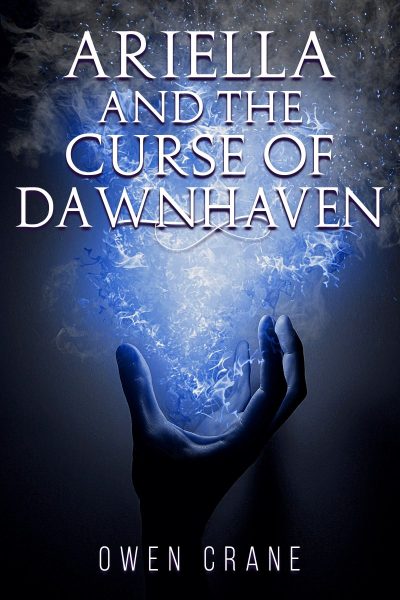 Ariella Lightharbour is heir to the crown with a nation at her feet but knows she’s meant for more. Forsaking her throne she chooses to become a Guardian. As she embarks on The Journey she must find the courage within herself to battle the deadly Ghost Raiders that murdered her father, discover the identity of the elusive shadow and fight to end the curse that threatens to overwhelm the land.

What Inspired You to Write Your Book?
I have always loved stories. My earliest memories are consumed by A.A Milne's tales of 100-acre wood, which was just down the road from where I grew up. Eventually, those books gave way to Roald Dhal, C.S. Lewis and Tolkien. It felt like a natural progression from reading the stories of others to creating my own. Talking long walks along the Irish coastline, I would dream up stories to tells my children, they became my inspiration.

Book Sample
Ariella smiled at the large, fearsome lady. “Madam, if you would be so kind as to lower your rolling pin that would make the captain here much more relaxed.”
Unused to being addressed in such a polite manner, the woman, somewhat against her will, found herself lowering the rolling pin and taking a step backwards. The barrel-chested man was still standing in front of Ariella and was still glaring.
“Now good sir, I am Princess Ariella of Lightharbour, House of the Eagle. Would you please let me know your name?”
Flustered, the man tried an awkward bow. Bowing was not something they did a lot in the village. Nor was meeting a princess and her guards.
“Your, err, ladyness, I am Robert of err…this farm and err…that house over there.”
“Excellent,” smiled Ariella, trying to reassure the man and keep the situation calm. “My escort and I were just passing through your village on the way to Stonegard. We noticed that you were upset about something. Is that right?”
“Damn right!” bellowed the rolling pin lady, finding her voice again. “This sewer rat,” she waved her rolling pin towards somewhere near the back of the crowd, but Ariella couldn’t make anyone out, “has been poisoning our fields and our river. If we hadn’t caught him in time, he would’ve poisoned the lot of us. We’re going to beat him, and there’s nothing you can do about it!” she said, swinging her rolling pin again and staring at the captain.
“My good lady…” began Ariella.
“Don’t you ‘good lady’ me! I’m no la-de-da lady, and this isn’t Lightharbour, it’s Trevena, so why don’t you and you little soldiers sod off!” She took a step forward, pointing the rolling pin at Ariella.
The palace guards simultaneously drew their swords again and tried to surround Ariella.
“Put them away!” said Ariella, exasperatedly. “She’s got a rolling pin, not a battle axe. Madam, we mean you no harm. We are only small in number and, as I said, we were on our way to Stonegard when…”
Ariella’s voice dropped off as she heard a growing rumble coming from behind the barn. The noise grew louder and louder until bursting around the side of the barn came a troop of heavily armed palace guards, their banners displaying the House of the Eagle.
“What?” Ariella was spluttering. “What are you doing here?”
The lead rider ignored her and looked at Captain Argon who gave a series of hand movements. Immediately, the new guards surrounded the mob, spears lowered, creating a wall of steel with no way out.
“Help!” someone shouted.
“We’re being invaded!” yelled another.
“We’re all going to die!” came a high pitched voice.
“Captain, would you like to tell me, exactly, what is going on?” Ariella was trying to remain calm, but she could feel the anger building.
“My orders come from the queen and I am obeying them,” he snapped.
“What orders?” she asked.
The captain shot Ariella an icy glare. “Our duty is the safety of the House of the Eagle, that includes you.  I am ordered to do whatever is necessary to protect you from an imminent threat.”
“Imminent threat? Is that what you’re calling it? A threat from an unarmed farmer named Robert and a militant milkmaid with a rolling pin! Have they got you and your men terrified, Captain?”
“She was threatening you, Your Highness.”
“With a rolling pin! This was what the bugle was about, wasn’t it? You were signalling them!” She glared back at the bugle player who seemed to shrink even further into his saddle.
Ariella turned her attention to the scene in front of her. The villagers had quickly turned from a baying mob to a quivering mass. All except the rolling pin lady. She was still swinging the pin and threatening soldiers.
“Everyone put away your weapons!" Ariella shouted.
The guards hesitated, looking back and forth between the crowd, the captain and the princess.
“Now!” she yelled.
Reluctantly, Argon gave a curt nod.  The guards raised their spears and put away their swords, but they kept their horses surrounding the villagers.
“Now, everyone back away, slowly.” Ariella stared down any of the guards that dared to look at her. Eventually, they all moved several paces away from the villagers.
“Captain, would you mind explaining to me why there are now another fifty palace guards standing with us in this field?”
“I do not take orders from or justify my actions to you, Your Highness.  My orders are directly from the queen.” He did not appreciate the tone Ariella was using.
“Queen’s orders? That was what you meant by ‘finalising some details’ when we were back at the palace, was it? They’ve been following us since then, haven’t they? I thought you said that you wanted an escort of twenty. Why are there fifty of them?”
The captain didn’t answer. He glared at Ariella, his displeasure evident.

Author Bio:
Owen was born in Malaysia but moved to England when he was still a baby. He grew up in the countryside in a small village outside of Brighton. After university in Manchester and a few years in Bradford he moved to Northern Ireland with his family. He loves food, fireside chats with good friends and long walks along empty Irish beaches.