You are here: Home / Free and Bargain Books / PermaFree Books / Archibald Lox and the Bridge Between Worlds by Darren Shan 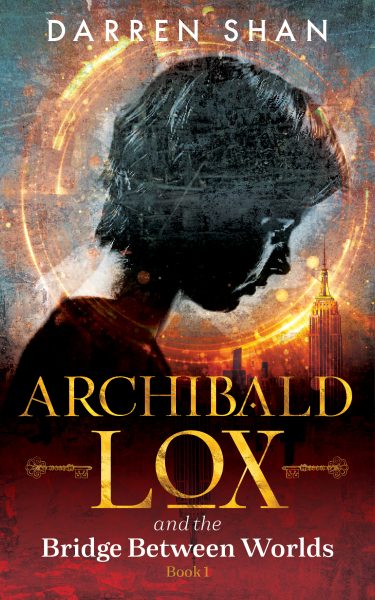 There is a universe beyond our own, known as the Merge. A young locksmith called Archibald Lox is about to cross worlds and explore it. As he learns about these lands of wonders, he will have to face cold-blooded killers, rivers of blood, hell jackals and more…

Book one of the Archibald Lox series, by Darren Shan, the New York Times bestselling YA author of Cirque Du Freak and Lord Loss.

“A brisk, entertaining tale that unfolds in a wonderfully bizarre world.” Kirkus.

“Shan has created an alternative world that is extraordinary and imaginative with fantastical creatures that both delight and horrify. A soon-to-be fantasy classic.” The US Review of Books.

“It’s a gripping saga that will be appreciated not just by young adult audiences, but by adults who enjoy other strong YA authors who create fantasy worlds appealing to young and old alike.” Midwest Book Review.

“Archibald Lox and the Bridge Between Worlds is a perfect middle grade book. I couldn’t put it down and read it in almost one sitting. For grabbing my attention from the very first page and making me excited about a series for the first time in ages, I give it a superb five out of five stars.” Addicted to Media.

“Inventive and imaginative with plenty of jeopardy – as satisfying a read as we’ve come to expect from Darren Shan. I read quite a lot during the seemingly endless lockdown but nothing made me smile quite as much as the Archibald Lox series” The Bookbag.

What Inspired You to Write Your Book?
I was walking across a bridge in London when I saw a young woman walking towards me, pulling a series of strange faces. I wondered why she was doing that, and had the thought that she might be trying to open a doorway to another world. Everything just mushroomed from there!

Book Sample
I focus on the people crossing the bridge. Many are tourists. A few joggers pant past. Men and women in business suits march by, talking loudly on their phones. Foreign students on school trips.

And then I spot the girl.

She’s my sort of age, darker skinned than me. She has black hair cut short, and wide brown eyes, dressed in plain cream trousers and a red, long-sleeved top. Her boots are navy, scuffed and stained with dry mud.

She comes running along the bridge in a panic, stops near where I’m standing and starts grimacing bizarrely. Her nose twitches, her lips gurn, her eyebrows shoot up and down, her tongue flickers out and around.

At first I think she’s pulling faces at me and I open my mouth to snap at her, but then she throws a worried – no, terrified – glance backwards, and I realise she hasn’t even noticed me.

Two men are striding towards us. They’re dressed in white suits, white shoes and white ties. One is black, the other pale like me. Both are bald, except for a curved, thin strip of white hair that arcs across their foreheads, the tips of the crescents pointing towards the backs of their heads.

The pale man is holding a long, narrow knife, the sort they called a stiletto in the old days. The darker man is carrying an axe, swinging it through the air in short, menacing strokes.

It’s clear that the men are chasing the girl and will kill her if they catch her.

The girl gulps, then pulls more faces. She’s staring at the paving slabs. I want to cry out and warn her of the danger, but she’s obviously aware of the threat. I can’t understand why she isn’t fleeing, why she’s drawn to a halt and is wasting precious time pulling those ridiculous faces.

I think about intervening – I could tug the girl away from the onrushing men and help her escape – but I’m rigid with fear, breathing shallowly, eyes wide, shocked by what’s happening.

When the men are several metres away, a couple of slabs in the bridge shimmer and a hole yawns open. I think it’s a trick of the light, so I do a double take, but it’s definitely a hole, a gap where a moment before there had been solid stone.

With a victorious yelp, the girl throws herself into the hole. The men’s faces twist with rage and they pick up speed, but the girl yells something, and in an instant the slabs are back in place.

The hole is gone.

The bridge is solid again.

The girl has disappeared.

Author Bio:
Darren Shan is the author of more than 50 books, including the New York Times Top 10 bestselling Cirque Du Freak and Demonata series. He has sold in excess of 30 million books worldwide.