You are here: Home / Children's Books / Children's - Science Fiction & Fantasy / Anyia: Dream of a Warrior by Jacquitta A. McManus 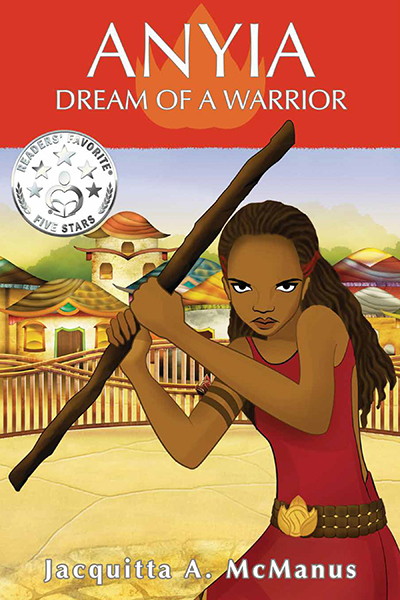 Growing up in Nagoran Village kept Anyia safe from Empress Zarina, Thor Warriors, and the stolen magic they used. But, being safe also meant she was kept from the outside world. Locked in a tradition that she saw no value in, she was determined to follow her dream of becoming a warrior. To do this, she will disregard the Chief’s orders, her father, and venture into the forest to find Amoonda; the only female ever named a warrior. Crossing the border, she will leave the safety of the magic treaty into a place patrolled by Thor Warriors, and her actions will threaten the one thing that protects them all.

This book is the beginning of an epic story of a feisty and determined young girl’s journey to follow her dreams. She will encounter magic, a Sif, and Thor Warriors. It explores themes of community, determination and is sure to become a favorite in any beginning library. It’s perfect for readers ages 8 to 12.

Targeted Age Group:: 9-12It's an epic story that follows her on a journey to test who she is as she begins to find magic, friendship, and enemies.

What Inspired You to Write Your Book?
For years, I had stories floating around in my head, and the idea of writing them down and creating a book never entered my mind. But, one day, when I was reading a book to my young daughter, who is now in college, the idea of writing popped into my head. I would like to say it came from a pure desire to write and tell stories, but that wasn't my first inspiration.

Book Sample
Giggling, Anyia walked down the worn path in her red and gold royal dress as Pepo bugs, ancient animals of the Nagoran Forest, flew around her.
“Doesn’t it feel like a day for great things to happen?” said Anyia.
It wasn’t her usual morning walk, but today was the day she had been waiting for.
For months, through the land of Ethonia down to the Nagoran Village, there had been gossip about Amoonda, a female warrior—the only female to ever be named a warrior for the courage she showed as she helped to forge the treaty of lands. The rumors said she would be passing through the forest to meet with the Treelins on this day.
Anyia was excited. Her dream was to become a warrior like Amoonda and bring honor to her village. It didn’t matter to her that females were forbidden to fight in battle. Anyia thought that following old traditions was mindless. If females were allowed to become warriors, they could help protect and bring honor to the Nagoran Village just like the males.
Anyia followed the Pepo bugs through the forest until she saw the tree she was looking for—tall, with lush golden-leaved branches that reached up to the sky.
“There it is,” she said, excited. “An Erow tree.” Eyes wide, she ran up to the lean tree and rubbed its trunk, the bark smooth under her hands. The soft scent of the leaves filled her nose and she smiled, looking up, softly tapping the tree trunk with the palm of her hand.
“Hummmmm,” she said, her voice musical as she pressed her right ear against the tree. “I can hear it.” She giggled. “I can hear it humming.”
The Pepo bugs flew into the canopy. Anyia smiled.
“The rumor is true. This is the tree,” Anyia said. “Amoonda is coming to meet with the Treelins.”
Looking up at the canopy, Anyia watched the Pepo bugs fly through the many layers of golden leaves, bouncing along, sending up puffs of dust.
A loud screech made her turn quickly.
The Pepo bugs flew down from the canopy and, one at a time, their purple glows turned bright red.
“It’ll be all right,” said Anyia. She knew that Pepo bugs turning red meant danger was near; being outside the boundaries of the village could be perilous, but she had to find Amoonda.
When the loud screech sounded again, she ran toward it, her curiosity piqued.
The Pepo bugs followed as she ran off the worn path, up the hill toward the edge of the forest. At first all she could see was tall grass, but when she reached the top, she gasped.
A column of Thor warriors in dark blue and silver garb marched across the field between Nagoran Village and Monko Village. They look dangerous, Anyia thought.
A half-dozen or so were carrying wooden crates; the doors were made of metal bars. She couldn’t see what was inside, but knew she had found the source of the screech.
Watching quietly as they marched toward the wooden swing bridge that would lead them past Nagoran Village toward the port, Anyia wondered if it were true that some of them had the power to freeze a person’s body.
Then the lead warrior turned and looked her way. Anyia’s heart dropped and she quickly sat on the ground.
“He didn’t see me,” whispered Anyia, trying to reassure herself. “He didn’t see me.”
After a couple of minutes and a deep breath, she peeked back over the tall grass and saw that the lead warrior, along with the others, was gone. She was relieved.
Leaning toward the Pepo bugs, she whispered, “I have to go now. Father will be looking for me. But I’ll be back later to wait for Amoonda.”
The Pepo bugs flew in a swarm around her once more before scattering into the forest. Anyia headed home.
When she was back in Nagoran Village, she went straight to the center courtyard.
Her father, the chief, had already begun his morning speech. “I have not come to a resolution with Empress Zarina. Therefore, a treaty war still looms around us. The ban against leaving the boundaries of this village is still in force. The treaty is too great … the risk too high.”
“But what about our supplies? My stores are low,” a woman in the crowd said.
“Mine, too,” said another.
“I have sent a convoy of guards to market to replenish our supplies. They will be back in a day’s time,” the chief said.
“And what of the Mosa Village? I have family there. Are they still protected?” another asked.
“All villages under my rule are protected under the treaty. Guards have been sent and are stationed where necessary. Do not worry for your families,” Anyia’s father said.
“But my chief, I was told that Empress Zarina has a plan to break the treaty. Is this true?” the villager asked.
“No! The magic bond that forged the treaty will prevent any attempts she might make,” the chief said and scanned the crowd. “The treaty can only be broken if we both agree to break it. And I assure you, I will not.” The chief finished answering questions and dismissed the villagers.
Anyia walked toward him, dragging her feet as he talked to Sato, the lead guard.
“Oh, Anyia,” he said as she approached, “Did you start your duties as a Yora today?”

Before Anyia had a chance to answer, her father reached out to hug her; a small Pepo bug flew from behind her, back toward the forest. Anyia nervously looked up at her father, hoping he hadn’t noticed, but he had.
“You’ve been outside the village boundaries, into the forest.”
“Umm … yes, Father, but I was not in any danger.”
Her father’s face went from kind and loving to angry and frustrated. “How can I expect my people to obey me when my own daughter does not? Do you wish to dishonor me … our village?”
“I meant no dishonor, Father,” said Anyia; her voice was barely audible. Dishonor was the last thing she wanted. She sought honor.
Anyia turned to her mother, who stood stolidly in a hand-crafted opulent Nagoran gown, for help but only found empty brown eyes and the gleam of the village crest reflecting upon her headpiece. And although she looked like her mother with her oval face, high cheekbones and elegant features, they were nothing alike.
“If not dishonor, why would you so easily disobey me? Why would you travel outside the boundaries, knowing the dangers lurking there? You could have been captured!” her father said.
Anyia looked up into her father’s hazel eyes and saw her own. She wanted to stand up to him and say that she was looking for Amoonda, a woman warrior she had heard stories about, imagined, dreamed of—a courageous woman … skilled, known for her strength. She wanted to say she didn’t need protection because she had been taught the ancient fighting techniques of Kail and would one day be great like Amoonda and make him proud. Bring him honor.
But she didn’t. He would be furious. Ladies of the village didn’t do such things. A girl her age was expected to perfect the crafts of cooking and cleaning. She was to become a Yora like her mother and those before her and lead the young ladies of the village. But it was something she had never wanted and he would never understand.
Looking down, she quickly decided to tell him what she thought he wanted to hear. “I got lost on my way to pick morning berries. I saw a Pepo bug and thought to follow it, but before I knew it I was past the boundaries of the village.”
“Lost!” said her father as he bent down, looking into her eyes. His right eyebrow raised high as he tilted his head in search of answers.
Anyia nodded, slumped over and stood uneasily. She tried to keep from fidgeting, but she couldn’t stop shaking. Her breath was shallow and anxiety rushed through her body. When the crowd of people behind her quieted, she knew things weren’t good. The center of her stomach started to turn and she felt like she was going to be sick.
Her father, taking another look at her, turned and paced in a circle, the bottom of his white robe dragging across the round, hand-worked stones.
Tension filled the air.
Anyia’s mouth felt dry. All she wanted was for it to be over. She couldn’t imagine what he was thinking or what he was going to do, so she stared at the stone courtyard as he paced. She was ashamed to look at the crowd. All she could do was wish that the Pepo bug hadn’t followed her.
Minutes later, his leather-sandaled feet stopped on the stones she was staring at. Her heart dropped. The palms of her hands were sweaty and she held her breath as she slowly looked up to face him. Scared.
“Why you choose to be disobedient … I do not know. It is an act of dishonor. And I do not tolerate dishonor. Not from my people and not from my daughter. The rules of this village are set for a reason and you are to obey them. It is not a choice,” he said, turned to the line of guards standing behind him and pointed. “You.”
A boy of about seventeen bowed and took a step forward.
“She’s not to leave the village grounds without my expressed permission,” her father said. His voice carried through the air like a heavy Kork tree drum.
“Yes, sire,” yelled the boy.
“No, Father … nooo. It was not an act of dishonor,” Anyia said.
But her plead went unnoticed. The chief turned and walked away, followed by her mother.