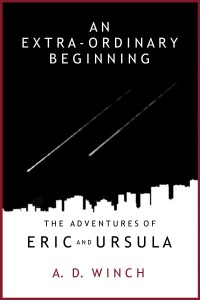 In 1947 a UFO crash landed in Roswell, USA. There were no known alien survivors.

Over sixty years later two unique children from very different backgrounds discover they have abilities far beyond the ordinary. Only a secret US agency knows why.

The children, Eric and Ursula, embark on an exciting journey to find the answers. Answers that lie in old space debris scattered across Europe.

Their every move is monitored and a deadly game of cat and mouse begins. Will they find the secrets to their shared past? Or will the agency find them first?

What Inspired You to Write Your Book?
While walking in the Tatra Mountains in Slovakia, I was discussing superheroes with a friend. We wondered why most superheroes were white guys who wore their underwear on the outside. By the time we got down the mountain, I had the characters and a plot.

How Did You Come up With Your Characters?
I wanted to create characters who were young adults in themselves who readers could relate to. They have extraordinary abilities but ones that we are all capable of.

Book Sample
“Welcome to the first Eric and Ursula Champex Championship,” Granddad Benjamin announced. “When I say ‘go’ the two of you will run around the lake, visit each of the twelve exercise stations in order and do the exercises that we saw yesterday. The first back here is the winner and will get to eat Mémé’s delicious, homemade, Christmas biscuits.”

Eric looked at Ursula and silently mouthed, “When I win, you are history.”

Flicking her head back, Ursula pretended to laugh.

“Now, do you solemnly swear not to cheat?” asked Granddad Benjamin.

Stepping away from the path, Granddad Benjamin scraped a start/finish line in the snow.
“In that case, on your marks.”

Eric and Ursula squatted down at the line.

The two of them shot away from the line and Granddad Benjamin clicked the start button on the stopwatch Andrea had given him. By the time he looked up from the stopwatch they were already far away. It has been a number of years since he had seen racing children and he was surprised at the speed of Eric and Ursula. With every step they took, snow flew into the air and they soon vanished into a thick, white mist.

They were neck and neck as they reached the first station. After hopping over the ten logs, which the exercise demanded, they ran on to the next station still neck and neck. It was a pattern that was to be repeated over the next nine stations. From doing twenty star jumps to one hundred press-ups to fifty sit-ups, they would not be separated.

Eric was fuming. In all of his sports competitions, no child had ever been able to match him physically and he was not going to lose now, especially to a girl. Ursula was furious. If she could outrun a policeman why couldn’t she do the same with this spoilt, unpleasant, rich kid?

They sprinted off the lake path, into the dark forest and towards the eleventh station.
It was made up of four thin, long logs, placed in a square shape half a metre above the ground. It was a simple exercise that tested balance and the two children jumped onto it at the same time. However, instead of going the same way around the square they chose to go in different directions. They negotiated the smooth, slippery logs with confidence and sped around the first half of the square. As they approached the half-way point, they were both aware that they were heading for a collision but neither wanted to stand down.

You WILL get out of my way, thought Eric.

Rather than slow down they dug their heels in and sprinted as fast they could towards the other. Just before they collided head-on Eric leapt into the air and Ursula leant backwards into a skid. She was almost horizontal as she slid underneath him. Eric somersaulted above her and was about to land back on the log when a gust of wind blew. It was barely noticed by the two children but, unknown to Ursula, it blew her hood into the air. Silently it hit Eric’s foot and enveloped it. Eric could do nothing; he was pushed off course and his trapped foot missed the log. He fell towards the ground and Ursula was dragged with him. They fell heavily on top of each other and a great plume of dusty snow exploded into the air.

Author Bio:
I’m the author of the ‘Adventures of Eric and Ursula’. Over the last eighteen years, I have lived near Dracula’s castle in Transylvania, war-torn Sri Lanka and above the Hadron Collider in Geneva. Currently, I live in Prague, not far from a space rocket covered in giant babies.

The idea for ‘The Adventures of Eric and Ursula’ came to me while hiking in the Tatra Mountains in Slovakia and is my first series of novels.

For an older audience, I wrote the films ‘Seagulls’ which was shown at the Brighton Film Festival and ‘your baby disappeared’ which premiered in Prague in 2011. When I am not writing I enjoy spending time with my family, cycling, watching movies, listening to comedy and being creative.