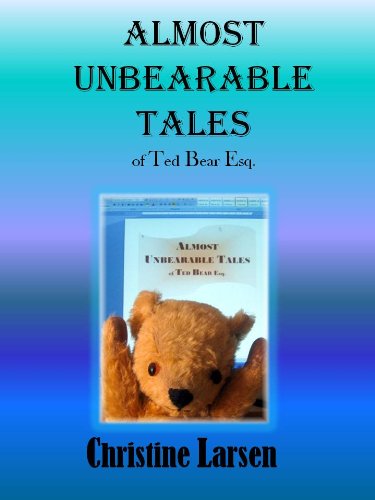 Even when dolls were the favourite toy of many small souls, I loved my Ted Bear – for more than 66 years now, and at his insistence I photographed him in all manner of poses for a special collection dedicated to him. This was the third in my children’s books series ‘Small Folk Tales’.
Anyone who knows my Ted as I do, would realise this would not be enough for him. No… Ted demanded more photos of him and more of his mates and for me to write a cameo tale about each, to ensure no reader would underestimate his value and charm. “Come on Mum,” Ted said. “You can do it. Just think about all the secrets and dreams and tears you’ve invested in me. Aren’t I worth it?”
Easy for Ted, as he peered over my shoulder, supervising, chattering non-stop as the memories poured out, urging an edit here, a tweak there… over and over. After all he IS an old secretary’s secretary! Thanks for all the memoriesTed… without you Life would have been SO empty.

What Inspired You to Write Your Book?
I am asked about inspiration as if I had a choice in the matter. Huh! With a demanding character like my Ted Bear, it was only a matter of time until he wore me down. I mean really… how much pouting, sniffling and grovelling can one Mother stand up to? He won, as he always knew he would, and as Thomas Edison said, “Success is 10 percent inspiration and 90 percent perspiration.” We’ll wait and see about the success bit, Ted and I.

JUST LIKE A GREAT WINE… I AM AGEING BEAUTIFULLY

These days I find I need glasses more often than not. The vision problem began when I found that suddenly my arms were too short for comfortable reading. This disturbed me greatly when Postie Bear brought me important mail from far away friends. It’s funny – I didn’t feel my arms getting smaller. Did they shrink, do you think?
For a while I really thought so, and it was really quite unbearable. Then my Mum bought some specs for me. At first I felt a bit weird… kind of different… sort of ashamed and scared of what everyone would think when they saw me. Do you know the feeling?
I thought maybe some people wouldn’t like me anymore. It was gross really, and I felt so unhappy. But Mum gathered up all the Knitty Gritty Kids – and Gran and Grandpa too – and we all sat on the lounge together and talked it through.
Everyone was SO kind. I had SO many hugs, and small people telling me how much they loved me, with or without glasses, I could hardly bear it, and I must admit to the odd sniffle. And as if that weren’t more than enough, the Knitty Gritty Kids went without all manner of things to give me a couple of warm and special scarves for the coldest nights.
The kindness of the Knitty Gritty Kids is overwhelming. Who else would have guessed how cold wintry nights can be as you sit perfectly still… for hours, and hours. Who else would have understood how stiff a neck can get when it doesn’t move… for hours, and hours. The Knitty Gritty Kids could – bless their small loving hearts. What a family!

About the Author:
Christine finds herself amongst many talented, knowledgeable and clever authors, and she just cannot believe it. After decades of feeling overwhelmed by others’ credentials compared to her humble beginnings and life experiences, she felt she was not an author’s armpit. But gradually, she realised that she too had tales to tell – stories many others would find entertaining and fascinating – especially because 55 years of Christine’s life have been lived in the last century, as a wife, mother, grandmother and farmer. Earlier attempts seeking publication met with a barrage of rejections, and when these were combined with the demands of her busy lifestyle and responsibilities of family and farm, it all became too overwhelming, and her creative writing was shelved for more than three decades. An opportunity came Christine’s way simultaneously with the ’empty nest syndrome’ and suddenly, her trusty pencil re-emerged, and a series of lenses on Squidoo began, followed by many articles on Ezine Articles. These proved successful, praiseworthy, even award-worthy, and it was all enough to encourage her to rewrite and tweak her old ‘stuff’, and add in a whole new batch. This series of children’s books is the joyous result.